US Withdrawal from N. Deal Likely to Serve Iran's Interests

Rasa - Iranian President Hassan Rouhani underlined that Washington's decertification of the 2015 nuclear deal will harm the US and could even bear some benefits for Iran in certain areas and under specific circumstances. 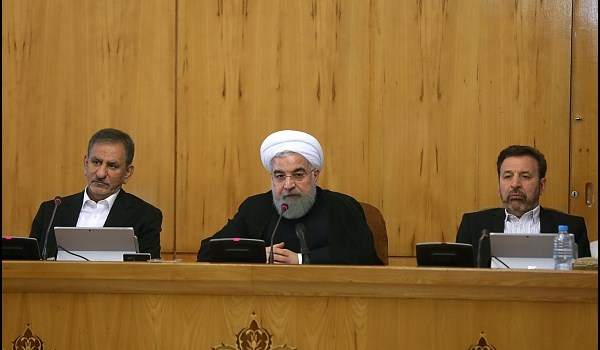 RNA - "If the US makes a mistake and withdraws from the nuclear deal, it will only harm itself as we have different ways ahead and will choose the path that serves the interests of our government and country and will have no problem for attaining our goal and paving our path," President Rouhani said, addressing a cabinet meeting in Tehran on Wednesday.

Noting that the countries which have negotiated with Iran - Britain, Russia, France, Germany and China - the EU and other world states support Iran, he said, "If the US makes this mistake, it will act against its own national interests and prestige."

"The US withdrawal from the nuclear deal could even benefit us in certain fields and under certain circumstances," President Rouhani said.

"Trump will face big problems in Europe and Asia by implementing any new sanctions as the global economy can no more afford new sanctions," Rezayee said on Wednesday.

Noting that Trump's measures against Iran will harm the global economy and major international investors more, he said, "Therefore, everyone is displeased with Trump's remarks, and his measures and sanctions will be nothing but mottoes."

Tags: US Iran Rouhani
Short Link rasanews.ir/201oeY
Share
0
Please type in your comments in English.
The comments that contain insults or libel to individuals, ethnicities, or contradictions with the laws of the country and religious teachings will not be disclosed