Rasa - Syrian army forces, supported by allied fighters from popular defense groups, have established control over the southeastern outskirts of the capital Damascus, driving foreign-sponsored Takfiri militants out of the strategic area. 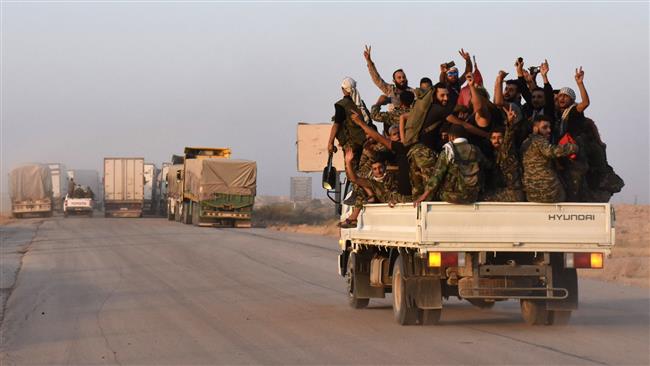 RNA - Syria’s Joint Operations Command announced in a statement on Tuesday that Syrian troops and their allies had liberated 8,000 square kilometers of territory from the clutches of terrorists, Syria’s official news agency SANA reported.

Syrian forces also regained control over all the hilltops on the border with Jordan.

Russian Defense Ministry spokesman Major General Igor Konashenkov said on Tuesday that Russian military aircraft have carried out 182 airstrikes against Daesh terrorists in Syria over the past 24 hours, killing a total of 70 Daesh terrorists in the process.

Konashenkov added that the slain militants came from Central Asian countries and Algeria.

“A Daesh command post and three groups of terrorists, who had arrived in the area from the Iraqi territory as reinforcement were eliminated. The killing of 34 militants, and destruction of five pickup trucks equipped with large-caliber launchers plus two vehicles loaded with munitions been confirmed,” the senior Russian military official pointed out.

Konashenkov further noted that the airstrikes took place near the village of Hatla, located along the Euphrates River and southeast of Dayr al-Zawr.

Konashenkov stated that the submarines fired the missiles while submerged.

“Daesh terrorist group in Mayadin suffered significant damage, both in manpower and hardware,” he said.

Since 2015, Russia has been conducting aerial attacks against terrorist positions in Syria at a request from the Syrian government.

Tags: Damascus Syria
Short Link rasanews.ir/201oeM
Share
0
Please type in your comments in English.
The comments that contain insults or libel to individuals, ethnicities, or contradictions with the laws of the country and religious teachings will not be disclosed