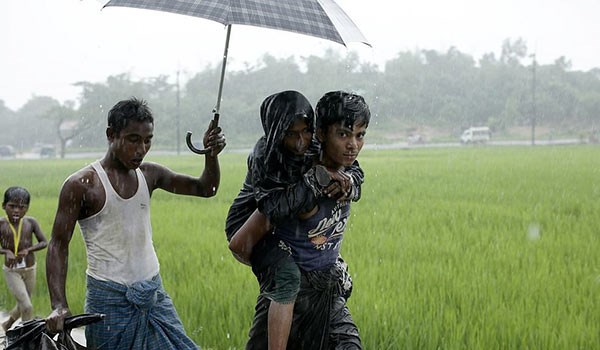 RNA - More than half a million Rohingya have fled Myanmar since Aug. 25 after insurgent attacks on security forces triggered a violent government crackdown, but the rate had slowed to about 2,000 refugees per day last week, aid agencies said, Daily Mail reported.

"We're back in a situation of full alert as far as influxes are concerned. It is a big increase to see 11,000," Adrian Edwards, spokesman for the UN High Commissioner for Refugees (UNHCR), told a news briefing in Geneva on Tuesday.

"We have had big numbers coming across by the day over the six weeks of this emergency. So we are back up to approaching some of those peak arrivals. Clearly we have to be prepared for more arrivals," he said.

Many of the refugees are reported to come from the Buthidaung area in Myanmar's Northern Rakhine state, which is 20-25 kilometers East of Maungdaw.

"Some said they had fled torching and killings back home; one boy was seen with a big gash across his neck," Edwards said.

"We don't know at the moment what is driving this," he added. "Some of these people have fled their homes several days ago and in some cases two weeks ago, so they moved towards the border before coming across."

There are also indications of more recent problems.

"As you may have seen from media reports which I can't verify, but there are reports about fires being seen close to the border (and) other problems there," Edwards said.

Meanwhile, a massive cholera immunization campaign began on Tuesday near Cox's Bazar, Bangladesh, aimed at protecting newly-arrived Rohingya and host communities from the disease which can be deadly, the World Health Organization (WHO) said.

Some 900,000 oral vaccine doses will be distributed, including 650,000 in an initial 10-day campaign to be followed by a second round from Oct. 31 targeting 250,000 children between one and five years old, the agency said.

There is a "clear and present risk" of the spread of cholera among the population.

"Luckily, we don't have any confirmed cases of cholera so far," WHO spokesman Christian Lindmeier said.

Tags: Rohingya Myanmar
Short Link rasanews.ir/201oe4
Share
0
Please type in your comments in English.
The comments that contain insults or libel to individuals, ethnicities, or contradictions with the laws of the country and religious teachings will not be disclosed