Rasa - Iraqi forces have found a mass grave in the country’s troubled western province of Anbar containing the remains of nearly two dozen Daesh Takfiri militants killed during heavy clashes with government forces and their allies during the campaign for the liberation of the strategic city of Ramadi. 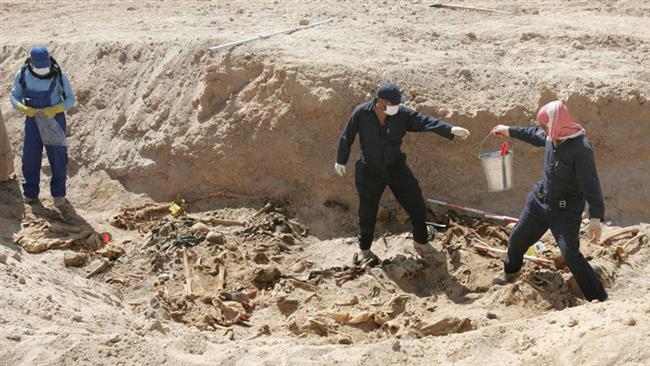 RNA - Colonel Alaa Fadel told Deutsche Presse-Agentur (DPA) that the grisly finding was made while Iraqi forces were combing the mountainous Abul Jir region west of al-Rahaliya district of possible remnants of the terror group.

Fadel noted that the mass grave contains the remains of 20 bodies of Daesh Takfiris.

On December 28, 2015, the Iraqi Joint Operations Command declared that Ramadi, located about 110 kilometers (68 miles) west of the capital Baghdad, had been "fully liberated" from the Daesh Takfiri terrorist group, and that government soldiers had raised the Iraqi national flag over the main government building there.

State-run al-Iraqiya television network showed troops, some waving Iraqi flags and others brandishing machine guns, chanting and celebrating inside a government complex that had been taken from Daesh the day before.

Ramadi fell into the hands of Daesh in May 2015, months after the terrorist group overran territories in northern Iraq.

Meanwhile, a high-ranking bomb expert for the Daesh terrorist group has died of injuries sustained during clashes with Iraqi army forces and pro-government fighters from Popular Mobilization Units, commonly known by the Arabic word Hashd al-Sha’abi, near Qurret Tabah region northeast of Diyala.

A security source, speaking on condition of anonymity, told Arabic-language al-Ghad Press news agency that the slain militant and his two aides were trapped as government troops and their allies staged an ambush.

One of the militants was killed during the fierce gun fight, while the two others were seriously injured.

Tags: DAESH Iraq
Short Link rasanews.ir/201odr
Share
0
Please type in your comments in English.
The comments that contain insults or libel to individuals, ethnicities, or contradictions with the laws of the country and religious teachings will not be disclosed