Rasa - A dozen civilians have lost their lives and several others sustained injuries when Saudi fighter jets targeted a residential area in Yemen's southwestern province of Ta'izz as the Riyadh regime presses ahead with its atrocious bombardment campaign against its southern neighbor. 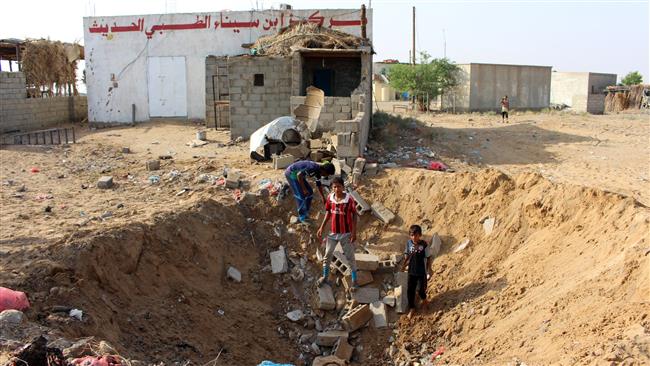 RNA - Local sources told Arabic-language al-Masirah television network that the military aircraft bombarded a house in the al-Zahari area of the port city of Mukha, situated 346kilometers south of the capital Sana'a, on Saturday afternoon.

The sources added that there were women and children among the victims, noting that people were desperately searching for loved ones trapped under the rubble of the collapsed building.

At least five people were killed and four others wounded on October 2, when Saudi warplanes struck a car as it was travelling along a road in the al-Barh area of Maqbanah district in Ta’izz province.

Saudi Arabia has been incessantly pounding Yemen since March 2015 in an attempt to crush the popular Houthi Ansarullah movement and reinstate former president Abd Rabbuh Mansur Hadi, who is a staunch ally of the Riyadh regime.

Tags: Yemen Saudi
Short Link rasanews.ir/201odH
Share
0
Please type in your comments in English.
The comments that contain insults or libel to individuals, ethnicities, or contradictions with the laws of the country and religious teachings will not be disclosed