Rasa - Head of Hashd al-Shaabi (Iraqi popular forces) Committee Faleh al-Fayyad announced that his forces will cooperate with the Syrian army in taking back the bordering areas occupied by the terrorists. 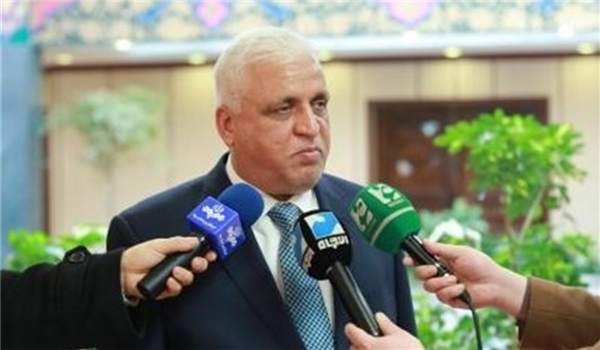 RNA - "Hashd al-Shaabi is the (Iraqi) government's arm and plays an important role in the liberation operations," al-Fayyad was quoted as saying by al-Forat news website in a press conference on Saturday.

"Merely, al-Qanem region at borders with Syria is under the terrorists' occupation and Iraq will soon cooperate with the Syrian military forces to liberate and regain control of common borders," he added.

Reports said earlier today that the Iraqi Air Force bombed the venue of a meeting of ISIL commanders near the border with Syria on Saturday, killing 20 terrorists including emir (military commander) of the so-called Baghdad velayah (governorate) of the self-proclaimed Caliphate.

Twenty terrorists, including emir of Baghdad velayah nom de guerre Abu Tariq, were killed in the air assault on the venue of a meeting of ISIL's senior commanders in one of al-Jamahir neighborhood of the town of al-Qa'em at border with Syria.

Abu Tariq was a former officer in Saddam Hussein's army.

Tags: Hashd Syria Iraq
Short Link rasanews.ir/201od8
Share
0
Please type in your comments in English.
The comments that contain insults or libel to individuals, ethnicities, or contradictions with the laws of the country and religious teachings will not be disclosed