Rasa - Amnesty International blasted the United Nations (UN) for attempting to downplay the crimes of the Saudi-led coalition against Yemeni children in a deadly war on the impoverished Yemen. 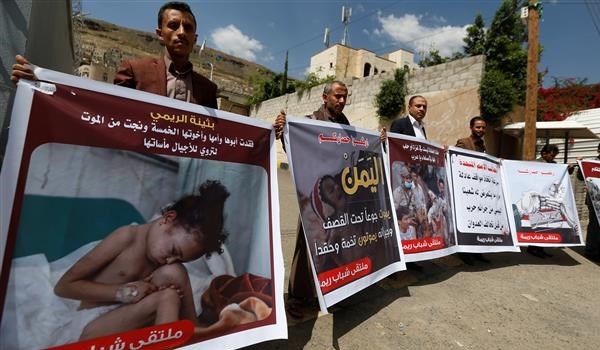 RNA - On Thursday, UN Secretary-General Antonio Guterres submitted an annual report on Children and Armed Conflict (CAAC) to the Security Council. The report, seen by Reuters, blacklisted the Saudi-led coalition for killing and maiming children in Yemen, presstv reported.

Saudi Arabia had previously lobbied hard to prevent being blacklisted. While its name appeared in that blacklist in 2016, then-UN chief Ban Ki-moon removed Saudi Arabia from the list a few days later, acknowledging that he had been forced to do so after the regime and its allies threatened to cut off funding to many UN programs.

This year, while the UN report did blacklist the Saudi-led coalition, it also said the coalition had taken measures to improve the protection of children in the armed conflict, in an apparent attempt to avoid too much Saudi backlash.

On Friday, Amnesty international welcomed the UN’s blacklisting of the Saudi-led coalition but condemned the world body for attempting to reduce blame on the coalition by claiming that it has taken unspecified measures to protect children.

“Every time the United Nations makes concessions that allow perpetrators of crimes under international law to evade criticism or justice, it emboldens others to commit violations that cause immense misery to people around the world,” Sherine Tadros, the head of UN office in New York for the UK-based rights group, said.

“While we welcome the overdue listing of the Saudi Arabia-led coalition in the CAAC report, it is a shame that the UN caved in to pressure and included it in a new category specifically designed to limit condemnation of the coalition,” she added.

The report held the Saudi-led coalition responsible for 683 child casualties in Yemen and for 38 attacks on schools and hospitals during 2016.

Saudi Arabia’s UN Ambassador Abdallah Al-Mouallimi claimed on Friday that “there is no justification whatsoever” for the regime to be on the UN blacklist.

The cholera outbreak in Yemen which began in April, has also claimed over 2,100 lives and has infected 750,000, as the nation has been suffering from what the World Health Organization (WHO) describes as the “largest epidemic in the world” amid a non-stop bombing campaign led by Saudi Arabia. Also Riyadh's deadly campaign prevented the patients from traveling abroad for treatment and blocked the entry of medicine into the war-torn country.

The Ansarullah movement has been defending Yemen against the Saudi-led invaders.

Tags: Yemen UN Amnesty Saudi
Short Link rasanews.ir/201od3
Share
0
Please type in your comments in English.
The comments that contain insults or libel to individuals, ethnicities, or contradictions with the laws of the country and religious teachings will not be disclosed