Rasa - Afghans have taken to the streets of the capital Kabul to protest against the presence of foreign troops in the country. 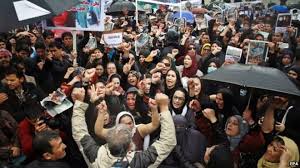 RNA - The rally was held ahead of the anniversary of the US invasion of Afghanistan 16 years ago.

The protesters on Friday chanted slogans against "occupation," while holding anti-US and anti-NATO placards.

“We cannot bear occupation anymore,” said one protester from the Solidarity Party, which organized the rally.

"Every day we witness them bombing our cities and thousands of innocent people are killed … we want justice we want all the US and NATO occupiers to leave Afghanistan as soon as possible and leave the country to the Afghan people to decide what they want,” added the protester.

The United States launched Operation Enduring Freedom on October 7, 2001, joined by military forces from the United Kingdom. The two were later joined by other forces, including the Northern Alliance.

The US-led NATO forces rapidly drove the Taliban militants ruling the country from power by December 17, 2001, and built military bases near key cities across the country.

Most of the al-Qaeda and Taliban militants fled to neighboring Pakistan, or retreated to rural or remote mountainous border regions such as the Tora Bora, where they still have a military presence to this day.

US-led combat troops withdrew from Afghanistan at the end of 2014, after which Afghan troops took charge of fighting Taliban militants and a nascent presence of the Daesh Takfiri terrorist group, which was seeking a foothold in the war-ravaged country.

In August, US President Donald Trump announced a plan that would send thousands of additional US and allied troops to Afghanistan.

Despite the presence of foreign forces, one-third of Afghanistan is either controlled or contested by the Taliban and other militant groups, which control the booming drug trade in the country.

Tags: Kabul US Afghan
Short Link rasanews.ir/201ocr
Share
0
Please type in your comments in English.
The comments that contain insults or libel to individuals, ethnicities, or contradictions with the laws of the country and religious teachings will not be disclosed