Rasa - The Syrian army and allied forces have reportedly closed in on the eastern city of al-Mayadin, which is viewed as the current main stronghold of the Daesh terrorist group in the Arab country. 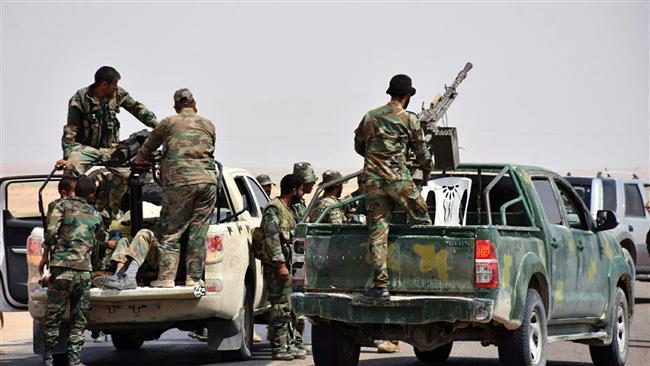 RNA - Hezbollah Military Media Center reported Friday that Syrian forces have retaken control of positions and heights parallel to the main road connecting al-Mayadin, located in the province Dayr al-Zawr, to the provincial capital of the same name.

Damascus forces and their allies are only 10 kilometers away from al-Mayadin, added the report.

Syria’s official SANA news agency reported Thursday that army units had engaged Daesh terrorists on the al-Mayadin-Day al-Zawr road and the surrounding areas, inflicting heavy losses on the militants and their military equipment.

Over the past weeks, Day al-Zawr has been the scene of a Russia-backed military operation against Daesh terrorists, many of whom have fled there from the eastern province from Raqqah, the terror group’s former holdout in northern Syria.

In June, US intelligence officials told Reuters that they believed Daesh had moved most of its diminished command structure and propaganda team to al-Mayadin southeast of Raqqah.

Backed by the Russian military and fighters of Lebanon’s Hezbollah resistance fighters, the Syrian army managed to break Daesh’s three-year siege on Dayr al-Zawr province in yet another significant blow to the terrorist outfit.

Dayr al-Zawr is subject to a separate military campaign by US-backed militants, been establishing self-ruled zones in Syria under the pretext of fighting Daesh.

The parallel offensive by the Syrian Democratic Forces (SDF), a US-backed alliance of mainly Kurdish militia, has on numerous occasions hampered the Syrian government’s anti-Daesh battles.

‘US using civilians as human shields’

Elsewhere near the Jordanian border, the Russian military said the US is using the refugees living in the Rukban desert camp as human shields to protect its military base in the southeastern town of al-Tanf.

Major General Igor Konashenkov, the spokesman for the Russian military, said the camp is home to some 60,000 people, mostly women and children, who have fled Raqqah and Dayr al-Zawr.

“Rukban refugees are de facto hostages, effectively a human shield for the US base. Think about it, other than by Americans such protection barriers are used in Syria only by those who they came here to fight, the terrorists,” the Russian general said in a statement.

He said the areas around the Tanf base has turned into a “black hole” used by Daesh terrorists to carry out attacks against Syrian troops and civilians.

“There were no reports of a single American operation” against Daesh in six months, according to the statement.

The US has long been accused of colluding with Daesh to provide safe passage and logistic support to the members of the Takfiri group in conflict zones.

Tags: US Syria
Short Link rasanews.ir/201ock
Share
0
Please type in your comments in English.
The comments that contain insults or libel to individuals, ethnicities, or contradictions with the laws of the country and religious teachings will not be disclosed