Rasa - About 145,000 Rohingya refugee children pouring into Bangladesh to stay safe from a brutal crackdown by the Myanmar government are now at risk of severe malnutrition, a UK charity has warned. 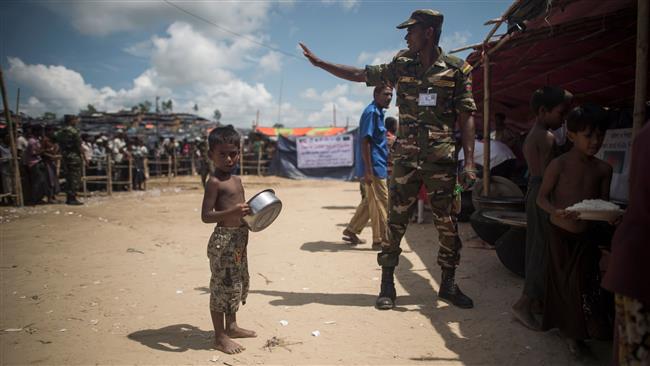 RNA - According to the Disasters Emergency Committee charity, more than 14,000 of the refugee children under the age of five are already suffering from “severe acute malnutrition.”

There were also more than 50,000 pregnant and breastfeeding Rohingya women among the refugees who are in need of proper food rations, the charity said on Thursday.

Myanmar soldiers and Buddhist mobs have been attacking Rohingya Muslims and torching their villages since October 2016.

The children are among the over half a million Rohingyas who have fled their country following a sharp rise in violence since August 25, following a number of purported armed attacks on police and military posts in the western state of Rakhine.

Evan Schuurman, the spokesperson for Save the Children humanitarian response team in Bangladesh, told The Independent that the “sheer speed” at which the crisis has expanded provides the biggest challenge for relief efforts to save the stranded children and their families.

“It’s truly staggering,” the activist said, noting that the refugee influx had amounted to an average of 10,000 people a day over the last six weeks.

This is while, according to the United Nations deputy spokesperson, Farhan Haq, there were already some 200,000 Rohingya in Bangladesh before the latest wave arrived.

Steve Taravella, the World Food Program's senior spokesperson, told the British daily that Bangladesh's own problems had exacerbated the situation.

"The flow of people is constant and rapid and overwhelming a country that is struggling to manage its own development needs," he said.

According to Schuurman, Bangladesh has been hit “particularly hard” with rains that have triggered heavy flooding and interrupted aid operations by causing transportation and logistics issues.

Bangladesh says it plans to expand a massive settlement under construction in its southernmost district to house nearly 900,000 persecuted Rohingya Muslims.

Tags: Rohingya Myanmar Myanmar
Short Link rasanews.ir/201oce
Share
0
Please type in your comments in English.
The comments that contain insults or libel to individuals, ethnicities, or contradictions with the laws of the country and religious teachings will not be disclosed