Rasa - The newly-appointed Chief Commander of Tahrir al-Sham Hayat (the Levant Liberation Board or Al-Nusra Front) was badly wounded in the Russian fighter jets' airstrikes in Idlib. 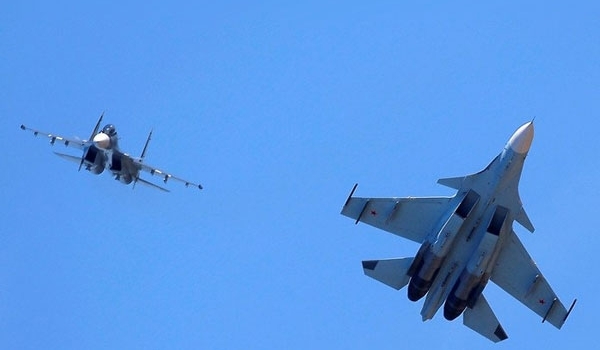 RNA - The newly-appointed Chief Commander of Tahrir al-Sham Hayat (the Levant Liberation Board or Al-Nusra Front) was badly wounded in the Russian fighter jets' airstrikes in Idlib.

Abu Mohammad al-Joulani, who was appointed as the Commander-in-chief of Tahrir al-Sham Hay'at earlier this week, was targeted by the Russian airstrike while at least 12 senior commanders of the Al-Nusra were killed, the Russian Defense Ministry Spokesman Major-General Igor Konashenkov said.

"Joulani sustained shrapnel wounds and is in a critical condition after losing his arm, according to information from multiple independent sources,” Konashenkov added. The airstrike killed at least 12 Al-Nusra field commanders and some 50 members of the group’s security detail, the ministry’s spokesman said, adding that Joulani’s aide was also killed in the Russian strike.

Also in the past 24 hours, Ezzat Hawari, a senior commander of Tahrir al-Sham Hayat, was gunned down by unknown assailants in the Central part of the militant-held Idlib city.

Militant-affiliated websites reported on Wednesday that Ezzat Hawari nom de guerre Abu Elias, a notorious commander of Tahrir al-Sham Hay'at, was killed in an attack by unknown raiders on the 30th street in Idlib city.

In the meantime, Abu Khadija Libia'ei, another commander of Tahrir al-Sham, was assassinated in an attack in the town of al-Dana in Northern Idlib a couple of days ago, the websites said, adding that Abu Hamzah al-Raqawi, one of his aides was badly injured in the attack.

The army men clashed fiercely with ISIL in the town of Kabajeb along the international highway to Deir Ezzur city and managed to fend off terrorists' offensive.

The army men killed tens of terrorists and destroyed their military vehicles and equipment.

Meantime, Syrian media outlets disclosed on Wednesday that Washington and Kurds have failed to reach an agreement with ISIL terrorists on earning control over a key region in Eastern Deir Ezzur.

The Arabic-language al-Watan daily quoted Sheikh Mohammad Amlah al-Daham, the leader of al-Akidat tribe, as saying that the US and Kurdish forces entered talks with the ISIL to let them capture the town of al-Basireh following the Syrian Army troops' advances towards the town of al-Mayadeen in Southeastern Deir Ezzur.

He told al-Watan that the Kurdish forces demanded the ISIL to retreat from al-Basireh region and join the Syrian Democratic Forces (SDF) in Hasaka province.

Al-Daham further told the paper that a large number of ISIL terrorists deployed in al-Basireh accepted the Kurd's offer and joined the SDF, but, a number of them refused and stayed in the region to continue battle, pushing the initial agreement into failure.

Also in the past 24 hours, the Syrian Army forces continued to hit ISIL's defense lines and managed to record significant advances towards the town of al-Mayadeen, the main bastion of the terrorist group in the Southeastern part of the province.

Field sources said that the army men, backed up by the army's artillery units and aircraft, continued to clash with ISIL in several flanks in Southeastern Deir Ezzur towards the town of Mouhassan.

Also, warplanes pounded ISIL's movements and positions in the towns and villages of Buqras Fowqani, al-Mayadeen, Jadid, Akidat and Bu Leil, killing a number of terrorists and destroying their equipment, the sources added.

In the meantime, another field source reported that the army units advanced along the Deir Ezzur-al-Mayadeen road, capturing several more positions.

Also, local sources reported on Wednesday that Mohammad Abid al-Mohsen, a notorious field commander of ISIL, escaped from the battlefields in Deir Ezzur to the positions of the SDF in Hasaka province.

The sources said that Abid al-Mohsen nom de guerre Abu Jarkha, a field commander of the ISIL, left Deir Ezzur along with three other terrorists for the regions in Hasaka province that are under the SDF control amid rapid advances of the Syrian Army troops in Deir Ezzur province.

The sources further said that the ISIL has been transferring the family members of its fighters to safer regions out of the town of al-Mayadeen following the army's advances in the region.

The Syrian Army troops pushed ISIL back from two more key regions in Eastern Homs on Wednesday, expanding the range of their advances against terrorists in the Central part of the war-hit country.

The army soldiers took control over the villages of al-Jaberiyeh and Baraqa al-Nashmeh North of the village of Um al-Rish.

Also on Wednesday, the Syrian Army troops pushed ISIL back from more regions in Eastern Hama, inching closer to the recapture of the entire border regions between Hama and Homs provinces, military sources confirmed.

The sources said that the army soldiers engaged in a tough battle with ISIL in Eastern Hama and imposed full control over the village of Abu Dali al-Sharqi.

In the meantime, a field commander said that the army has made a buffer zone between Eastern Hama and a large part of the triangle of Shoumeriyeh-Jubb al-Jarah-Mount Sha'er in Eastern Homs following its advances against ISIL in the last two days.

The commander further said that the army men have seized control over 30 villages and settlements with almost 1,000sq/km of area in their operation that they started from Sha'er region in Eastern Homs towards the village of al-Faseda in Eastern Hama.

Also on Wednesday, the Syrian Army troops stormed ISIL's defense lines near the town of al-Sukhnah in Eastern Homs, and seized control over several heights after inflicting a heavy defeat on the terrorists.

The army units and Qalamoun Shield Forces carried out a joint offensive against ISIL in Eastern Homs and managed to take control over Mount al-Mahsah, Mount Jabil and Fat'ha al-Mahsah region.

In the meantime, the army soldiers engaged in fierce clashes with the terrorists near al-Sukhnah and the town of al-Quaryatayn, killing over 100 terrorists and capturing tens of others.

Field sources reported that the army has dispatched a large number of forces and a large volume of equipment to areas near al-Sukhnah and has created a strong circle of forces around the town to prevent ISIL from moving towards Palmyra (Tadmur) city.

The source said that the army soldiers won back the village of Hardaneh and Tal (hill) Ayed and Tal Adimeh in Eastern Hama.

The source further said that the ISIL suffered heavy casualties and its military hardware sustained major damage in the attacks.

The Army forces have now the entire Eastern Hama under their control and there is no area left under ISIL's control in the region.

Also in the past 24 hours, the Syrian Army men captured two more key regions in Eastern Hama, and are about to purge ISIL from the entire province.

The army men engaged in fierce clashes with ISIL in Eastern Hama and imposed full control over the villages of Um Meil and Abu Habilat.

In the meantime, the Syrian Air Force bombed heavily ISIL's strongholds in Maksar al-Janoubi and its surroundings and Jubb Ayed in Eastern Hama, destroying several military vehicles and killing all the fighters on board.

A field sources confirmed that the army men are now ending ISIL's presence in Eastern Hama following their recent advances.

The sources added that most of the dead and injured people are children and women that had gathered around the well to take water out for their daily consumption.

They added that it was the last water well that contained drinking water.

Tags: Syria ISIL
Short Link rasanews.ir/201ocQ
Share
0
Please type in your comments in English.
The comments that contain insults or libel to individuals, ethnicities, or contradictions with the laws of the country and religious teachings will not be disclosed