Rasa - Bangladesh says it plans to expand a massive settlement under construction in its southernmost district to house nearly 900,000 persecuted Rohingya Muslims who have fled violence in Myanmar. 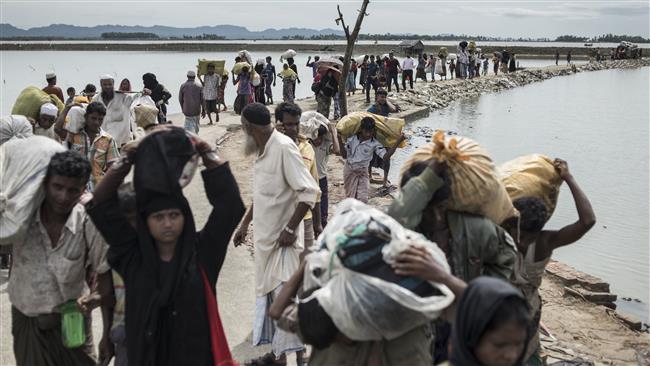 RNA - Mofazzal Hossain Chowdhury Maya, minister for disaster management and relief, said on Thursday that the estimated 890,000 refugees would eventually be moved to the new site near the border town of Cox's Bazar.

"All of those who are living in scattered places... would be brought into one place. That's why more land is needed. Slowly all of them will come," media outlets quoted the minister as saying.

Elsewhere in his remarks, the minister said that families were already moving to the new site, known as the Kutupalong Extension.

There are currently nearly two dozen camps and other makeshift camps along the border. Two of the existing settlements have already been shut down.

The mega camp project has, however, caused concern among doctors and charities on the ground that fear a disease like cholera could spread quickly through such a congested, overpopulated site.

The International Organization for Migration (IOM) says the situation is "slowly spiraling into a catastrophe of biblical proportions."

According to Mark Lowcock, UN emergency relief coordinator, the world body would be seeking around $430 million to scale up the humanitarian operation for the destitute Rohingya.

In a fresh bout of violence in Myanmar, soldiers and Buddhist mobs have been attacking Rohingya Muslims and torching their villages since October 2016. The attacks have seen a sharp rise since August 25, following a number of purported armed attacks on police and military posts in the western state of Rakhine.

Many witnesses and rights groups have reported systematic attacks, including rape, murder and arson, at the hands of the army and Buddhist mobs against Rohingya Muslims, forcing them to leave their generations-old homes and flee to overcrowded and squalid refugee camps in Bangladesh.

The UN has described the crackdown on Rohingya in Myanmar as a textbook example of ethnic cleansing.

Tags: bangladesh Myanmar
Short Link rasanews.ir/201ocO
Share
0
Please type in your comments in English.
The comments that contain insults or libel to individuals, ethnicities, or contradictions with the laws of the country and religious teachings will not be disclosed