Rasa - Prime Minister Haider al-Abadi says Iraqi armed forces have liberated the strategic town of Hawijah, ridding the Takfiri outfit of its last bastion in the northern part of the Arab state. 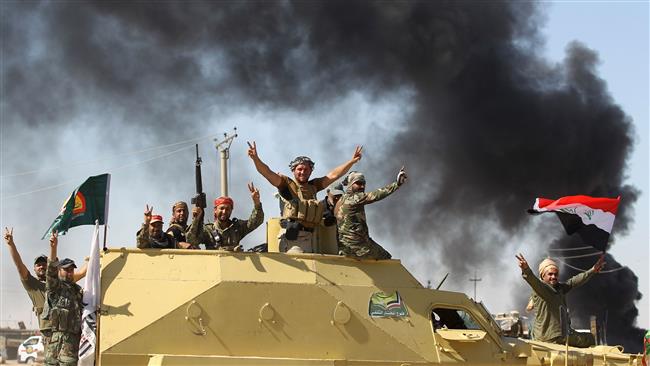 RNA - Speaking from the French capital, Paris on Thursday, Abadi said, “I announce the liberation of the city of Hawijah,” adding, “Only the outskirts remain to be recaptured.”

The premier described the latest gain as a “victory not just of Iraq but of the whole world.”

The announcement followed a statement by the Iraqi military, which said the center of Hawijah, located in Iraq’s oil-rich Kirkuk Province, is back under government control.

Iraqi forces “liberated the whole of the center of Hawijah and are continuing their advance,” said the operation’s commander, Lieutenant General Abdel Amir Yarallah.

The recapture puts an end to Daesh presence in northern Iraq and leaves the extremist terror group in control of a stretch of land in the west near the Syrian border, including the town of al-Qaim.

Hawijah lies between the two major routes north from Baghdad – to the second city Mosul, and to Kirkuk City and the semi-autonomous Kurdish region.

Mosul used to serve as the terror group’s main urban holdout in Iraq before its historic liberation in July.

Daesh has been driven out of most of the territory it managed to seize in Iraq and neighboring Syria in 2014.

In Syria, Daesh terrorists are mainly holed up in the eastern city of Dayr al-Zawr, where they are on their last leg in the face of two separate operations by the Syrian military, supported by Russia, as well as US-backed militants.

Tags: DAESH Iraq
Short Link rasanews.ir/201ocJ
Share
0
Please type in your comments in English.
The comments that contain insults or libel to individuals, ethnicities, or contradictions with the laws of the country and religious teachings will not be disclosed