Thousands of Bahrainis Mark Ashura in Manama despite Measures by Authorites

Rasa - Thousands of Bahrainis on Sunday managed to break all the regime’s measures taken in the capital Manama to ban the worshippers from marking the Tenth of Muharram anniversary, gathering next to Al-Khawaja mosque and performing the central prayer. 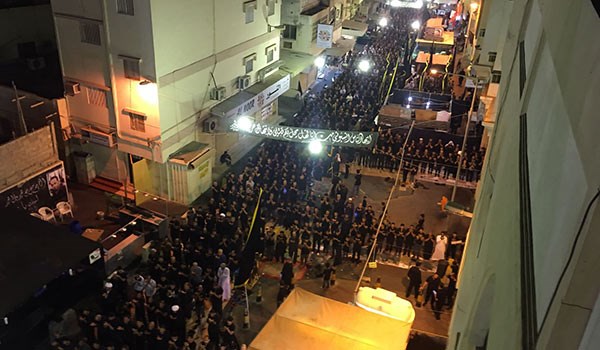 RNA - The deputy secretary general of Al-Wefaq Islamic Association Sheikh Hussein Dihi delivered a speech in which he warned against the seriousness of the regime’s aggression policy against the majority of the people, stressing that the Bahrainis would never be defeated, Al Manar reported.

Later, Ashura processions set off in the city as participators chanted slogans in support of the clerics persecuted by the regime authorities.

"We salute the people of our nation who are concentrating all their energies on commemorating this great anniversary," said Al-Wefaq in its statement adding that they "emphasize the importance of massively attending hussainiyas and Ashura processions and events."

Al-Wefaq stressed that "while the regime promotes loose slogans inside the country and abroad, establishes institutions, and sends delegations that talk about Bahrain's embrace of religious tolerance, several regions of Bahrain witness the authorities' continuous use of the policy of sectarian oppression and racial intolerance. 43 violations of Ashura manifestations have been recorded, including assaults on Ashura-related flags, banners and food stands in 15 areas, and summoning or arbitrarily detaining 19 citizens, including managers of hussainiyas and residents, who were later released."

Tags: Ashura AL-Wefaq bahrain
Short Link rasanews.ir/201oaz
Share
0
Please type in your comments in English.
The comments that contain insults or libel to individuals, ethnicities, or contradictions with the laws of the country and religious teachings will not be disclosed