Rasa - Shiite Muslim mourners, dressed in black, took to the streets or gathered in mosques across Iran and other world states on Sunday to commemorate the martyrdom anniversary of Imam Hossein (AS), the grandson of Prophet Mohammad (PBUH). 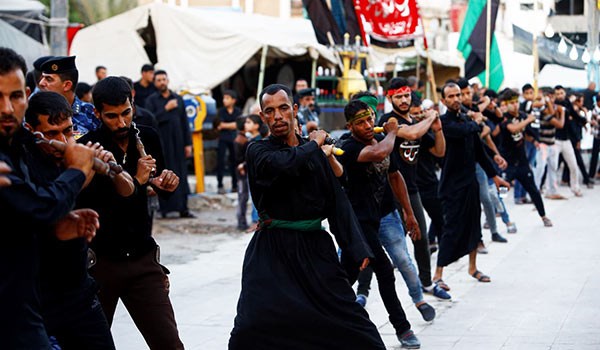 RNA - A large number of Iranian Shiite pilgrims flocked into Karbala, some 110 km South of Baghdad, to commemorate Ashoura day, which marks the death of Imam Hossein (PBUH) who was killed and buried in Karbala in 680 AD.

People in Iran and other countries throughout the world mourned on Ashoura, the 10th day of the lunar month of Moharram, the martyrdom anniversary of Imam Hossein (PBUH), on Wednesday.

Tasoua and Ashoura mark the climax of the Remembrance of Muharram, marking the death of Prophet Mohammad (PBUH)'s grandson, the revered Imam Hossein (PBUH) in the Battle of Karbala, in modern-day Iraq 1,300 years ago.

Ashoura is perhaps nowhere more ardently commemorated than in Iran. The only way to fully understand what this day means to so many Iranians is to delve into a history that has repeated itself there for years on end. From the Constitutional Revolution of the early 20th Century to the 1979 Islamic Revolution, the history of Ashura is reflected in every struggle against injustice in Iran. Whether opposing monarchy, imperialism or crippling sanctions, the history of this day holds a unique position in the hearts of countless Iranians.

Growing up in Iran, no matter your faith or circumstance, you will learn the story of Karbala, if only because every year you will get a holiday from school on Tasoua (the ninth day of Moharram) and Ashoura and witness countless men fill the streets in a parade of tears and self-flagellation. You will watch or possibly join in as these devout and distinctly Iranian Shiite Muslims pound their chests and fill the air with impassioned invocations and chants of "Ya Hossein." Amid this mourning, there will be a unique and fervent enthusiasm, for it was on this day, some 1,300 years ago, that Imam Hossein (PBUH) stood tall and strong in the face of oppression, against insurmountable odds.

You cannot understand the role of Islam in Iran without knowing the story of Karbala, nor can you underestimate its influence.

On the 10th of the month of Muharram, in the 61st year of the Islamic Calendar (680 ACE), in a barren land (which is now the city) of Karbala, some 100 kilometers Southwest of Baghdad, Imam Hossein (PBUH) - the grandson of the Prophet Mohammad (PBUH) and the third Imam of Shiite Islam - was savagely slaughtered in battle and rose to martyrdom.

The Battle of Karbala was the result of Imam Hossein (PBUH)'s attempt to liberate the people of the region from the tyrannical rule of the second caliph of the Ummayad Caliphate, Yazid I. Over the days preceding his martyrdom, Imam Hossein (PBUH) and his small caravan of friends and family (between 72 and 124 men) were surrounded by Yazid's army of thousands (over 30,000 armed men). They were ultimately forbidden access to water for three days, and on the tenth day (Ashoura), Yazid's army attacked in full force, killing all 72 of Imam Hossein (PBUH)'s closest companions, including his six-month old son. The final and most brutal casualty of Karbala was Imam Hossein (PBUH) himself, who sustained countless unimaginable wounds from arrows, stones and swords before his throat was cut while he was prostrating before the Lord in prayer. Thus, on that day, Imam Hossein (PBUH) rose as a martyr and has remained so for over a thousand years.

So, what does this story have to do with modern-day Iran and Iranians? Everything.

For the vast majority of Iranians who identify as Shiite and even for many who don't, the story of Karbala lies at the heart of all struggles against oppression and tyranny - personal and political.

In 1979, Yazid's army was that of the Shah, the SAVAK (his vicious secret police and intelligence service), and the British and American imperialism they represented to Iranians. The Islamic Revolution was, if nothing else, a grand morality play of the Battle of Karbala on a world stage, with Imam Khomeini and his cronies claiming the roles of Imam Hossein (PBUH) and his caravan respectively.

Who plays the role of Imam Hossein (PBUH)'s crew in Iran today?

Without a doubt, it is the Iranian people themselves under the Supreme Leader of the Islamic Revolution, Ayatollah Seyed Ali Khamenei; he is not Imam Hossein (PBUH) but a fervent and true assistant, aide and helper of Imam Hossein (PBUH) as he, the Leader of the world Muslims who is from the Prophet's offspring, is moving on the same path and Iranians are all his companions to the end.

Tags: Shiite Ashura
Short Link rasanews.ir/201oay
Share
0
Please type in your comments in English.
The comments that contain insults or libel to individuals, ethnicities, or contradictions with the laws of the country and religious teachings will not be disclosed