Rasa - Bahraini regime forces have attacked dozens of Shia Muslims commemorating the occasion of Ashura, which marks the martyrdom anniversary of Imam Hussein (PBUH), the third Shia Imam, as the Al Khalifah regime presses ahead with its heavy-handed crackdown against peaceful protesters. 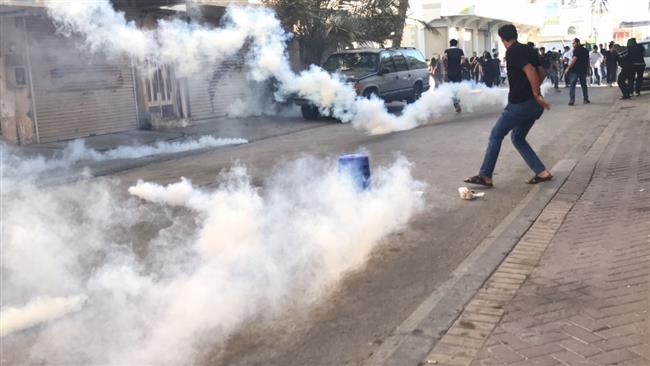 RNA - On Sunday, the Manama regime’s forces raided the town of A'ali, situated about three kilometers (1.8 miles) southeast of the capital Manama, and fired tear gas canisters to disperse mourners chanting “Labaik Ya Hussain” to invoke the memory of Imam Hussein (PBUH). Dozens of people suffered breathing difficulties, red eyes and wheezing as a result.

Al Khalifah regime’s forces also stormed the village of Diraz, the hometown of distinguished Shia cleric, Sheikh Isa Qassim, and fired tear gas canisters while using pellet guns to scatter the Shia mourners, who had converged outside the cleric’s residence.

On May 21, a Bahraini court convicted Sheikh Qassim of illegal collection of funds and money laundering, and sentenced him to one year in jail suspended for three years. It also ordered him to pay $265,266 in fines. The court ruling sparked widespread demonstrations across the kingdom.

The activists noted that al-Biladi was arrested after he prayed for the good health of Sheikh Qassim and the release of detained eulogist, Mahdi Sahwan.

They are demanding the Al Khalifah dynasty relinquish power and allow a just system representing all Bahrainis to be established.

Tags: Ashura Al Khalifah bahrain
Short Link rasanews.ir/201oau
Share
0
Please type in your comments in English.
The comments that contain insults or libel to individuals, ethnicities, or contradictions with the laws of the country and religious teachings will not be disclosed