Rasa - The secretary general of the Lebanese Hezbollah resistance movement has warned that the Israeli regime under “idiotic” Prime Minister Benjamin Netanyahu is pushing the region into war. 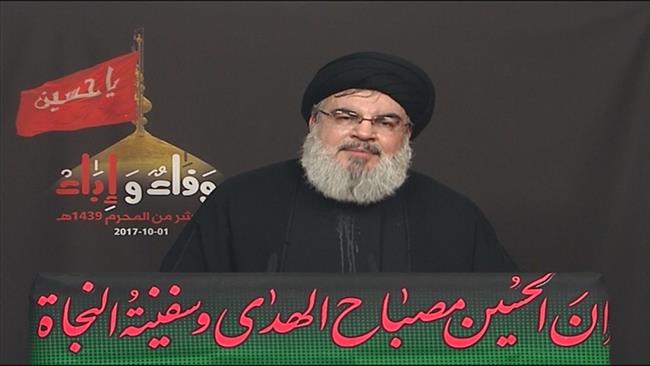 The Israelis do not have "a correct assessment of where this war will lead if they ignite it," he said, adding they "do not have a correct picture about what is awaiting them if they go to the idiocy of this war."

The Hezbollah chief also called on Israeli settlers to leave the occupied Palestinian territories and return to their countries of origin as they would have neither time nor place to escape after the beginning of an Israeli war on Lebanon and other regional countries.

“If this war happens, the Zionist settlers will pay a heavy price, and the entity will reach its demise,” he noted.

Israel launched two wars on Lebanon in 2000 and 2006, in both of which Hezbollah fighters inflicted heavy losses on the regime’s military. Over the past few months, Israeli officials have threatened another war on Lebanon.

Elsewhere in his speech, Nasrallah said the Daesh terrorist group is one of the most dangerous threats to the region, which has defamed the image of the holy religion of Islam.

Consequently, he said, those who created Daesh and provided it with financial and weaponry support should be held to account.

He further stressed that anti-Daesh battles should continue until the eradication of the terror outfit, urging the Islamic Ummah to adopt a tough stance against the Wahhabi-Takfiri ideology.

Takfirism which is a trademark of Daesh is largely influenced by Wahhabism, the radical ideology dominating Saudi Arabia and freely preached by Saudi clerics.

'Cost of war less than Yemeni surrender to Saudis'

Additionally, Nasrallah condemned the deadly Saudi aggression on Yemen, which began in March 2015.

He stressed that the Yemeni people consider resistance as their only option against the invasion and believe that the cost of the war, though high, is less than their surrender to the Saudis.

Tags: Nasrallah Hezbollah
Short Link rasanews.ir/201oao
Share
0
Please type in your comments in English.
The comments that contain insults or libel to individuals, ethnicities, or contradictions with the laws of the country and religious teachings will not be disclosed