Hamas seeks to prevent Israel from 'swallowing up West Bank'

Rasa - Hamas says recent attempts to resume reconciliation talks between the Palestinian resistance movement and its rival party, Fatah, are meant to end Israel’s occupation of the West Bank and blockade on the Gaza Strip. 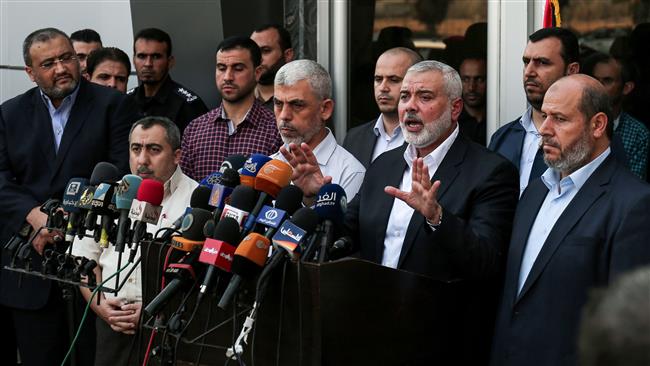 RNA - "The reconciliation is a will and a decision, to prevent Israel from swallowing up the West Bank and continuing its siege of the Gaza Strip," Hamas chief Ismail Haniyeh said in a statement released on Saturday.

Fatah and Hamas have been at odds ever since the latter scored a landslide victory in Palestinian parliamentary elections in 2006. Hamas governs the Gaza Strip while Fatah has set up offices in the West Bank.

The two rival Palestinian factions finally agreed on a unity government in April 2014, but it fell apart months later.

Last month, Hamas announced that it had agreed to dissolve its administrative committee in Gaza, invite the Palestinian Authority led by President Mahmoud Abbas to return to Gaza and hold new elections in the West Bank and the Gaza Strip.

The announcement followed negotiations in Cairo between Hamas leaders and Egyptian officials.

Palestinian Authority’s Prime Minister Rami Hamdallah is set to visit Gaza on Monday as part of the reconciliation efforts with Hamas.

Elsewhere in his statement, Haniyeh hailed the "strategic" Hamas decision, saying it came “out of a national will and with the support of its political and military power, as well as its steadfast stature facing the siege and the wars, while answering the will of our people for the sake of unity.”

"We understand that the inner-Palestinian reconciliation process could be long because of the setbacks along the way, and the fact that there are many issues that require brave decisions, but we are certain that we have started tearing down the wall of separation,” he added.

Following the Six-Day War in 1967, Israel occupied the West Bank, East Jerusalem al-Quds, the Gaza Strip and parts of the Golan Heights. Israel later withdrew from Gaza but has kept the coastal enclave under a crippling siege since 2007.

Tags: Hamas Palestinian Palestinian Gaza
Short Link rasanews.ir/201oal
Share
0
Please type in your comments in English.
The comments that contain insults or libel to individuals, ethnicities, or contradictions with the laws of the country and religious teachings will not be disclosed