Rasa - The secretary general of the Lebanese Hezbollah resistance movement says the potential breakaway of the Kurdistan region in Iraq is a threat to the entire region. 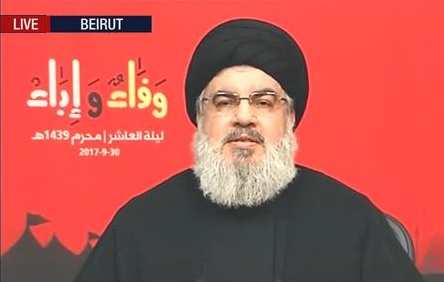 RNA - In a televised address from the Lebanese capital city of Beirut on Saturday evening, Sayyed Hassan Nasrallah warned that the Middle East was facing a “dangerous scheme of division.”

“We say to our beloved Kurds that this is not about deciding your fate, but about dividing the region according to sectarian and ethnic lines,” he said. “Regional nations bear the responsibility to confront this divisive scheme. There should not be any ethnic bias between Arabs, Kurds or Iranians. The problem is purely politically-motivated,” he added.

He stressed that wars and confrontations in the region “are in favor of Israel and the US, helping their weapons-manufacturing factories make a fortune.”

Elsewhere in his remarks, Nasrallah said the Lebanese resistance movement was now in its strongest position and this is even acknowledged by Israel, stressing that the movement seeks to preserve national security and stability in the Arab country.

"Hezbollah is in its strongest position and even Israel also says that Hezbollah is the second military in the region," Nasrallah said.

He also warned of plots that certain foreign countries are hatching in order to plunge Lebanon into conflict.

He added that Hezbollah supports the incumbent Lebanese government led by President Michel Aoun, advising political parties and factions in the country to avoid defiance and avail themselves of dialogue in order to resolve local issues.

The Hezbollah chief further stressed the importance of Lebanon’s parliamentary elections, which are expected to be held next spring.

“I totally agree with [Parliament] Speaker Nabih Berri that the parliament’s term must not be extended. Legislative elections will be held on time and based on the agreed electoral law,” Nasrallah pointed out.

He also highlighted victories achieved by Hezbollah fighters and Lebanese army soldiers in the fight against foreign-sponsored Takfiri militants along the border with Syria, emphasizing that Lebanon was “one of the world’s safest countries.”

Nasrallah then called on Syrian refugees residing in Lebanon to come back to their country, and take part in its reconstruction.

“Your interest lies in going back to your country,” he addressed them.

The Hezbollah secretary general also pointed to discovery of Israeli spying devices in southern Lebanon, stressing that the Beirut government must lodge complaints against the Tel Aviv regime with international organizations.

“The Zionist regime (of Israel) is violating international law and regulations,” Nasrallah commented.

He said days of the Daesh Takfiri terrorist group are numbered, stating that Israel was seriously concerned about the terror group’s defeat in the region.

“Daesh is losing ground in both Iraq and Syria. It was created by the United States, and supported by Israel as well as their regional allies,” Nasrallah said.

Tags: Kurd Nasrallah Iraq Hezbollah
Short Link rasanews.ir/201oag
Share
0
Please type in your comments in English.
The comments that contain insults or libel to individuals, ethnicities, or contradictions with the laws of the country and religious teachings will not be disclosed