Rasa - The cholera outbreak in war-battered Yemen is now the largest epidemic since records began, as a Western-backed Saudi-led coalition continues bombarding the impoverished Arab state. 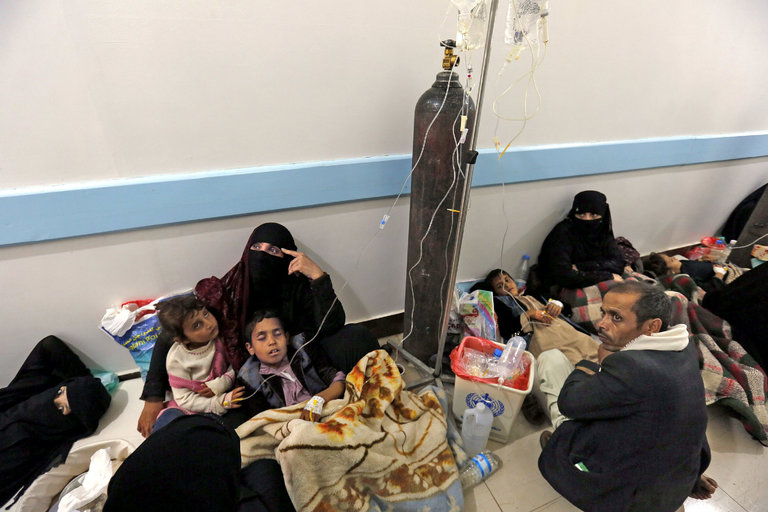 RNA - According to international charity organization Oxfam, the number of cholera-related deaths in Yemen has now surpassed 2,100, while a whopping 755,000 suspected cases have been registered since April 27, making the epidemic “the worst in history”.

“Yemen is the world’s worst humanitarian crisis and it is getting even worse. More than two years of war have created ideal conditions for the disease to spread,” Nigel Timmins, Oxfam’s Humanitarian Director, said in a statement.

“The war has pushed the country to the edge of famine, forced millions from their homes, virtually destroyed the already weak health services and hampered efforts to respond to the cholera outbreak.”

The collapse of the medical system has allowed cholera to balloon across the entire country. Aid organizations are struggling to reach people in remote, recently hit areas, and critical medical as well as food supply lines are being strangled by the Saudi-led blockade on Yemen’s airspace and ports.

Less than half of the country’s medical centers are still functional, 14.5 million people don’t have regular access to clean water, and in several provinces health and sanitation workers are still going to work despite not receiving their pay for a year.

While it is easily preventable and treatable in hygienic conditions, cholera can kill the old, young and otherwise sick in hours if fluids are not replaced.

Cholera cases to reach a million

Meanwhile, International Committee of the Red Cross said on Friday that the humanitarian situation in Yemen is a “catastrophe”, and cholera cases could reach a million by the end of the year. “The situation has really evolved in a very dramatic way and I think that it’s nothing short of a catastrophe,” Alexandre Faite, the head of the Red Cross delegation in Yemen told a news briefing in Geneva.

The Saudi-led coalition started a bloody aggression on Yemen in March 2015 to oust the popular Ansarullah movement and restore to power fugitive Abdul Rabbuh Mansour Hadi who resigned as president and fled to Riyadh. The Saudis have failed to achieve their stated objective and are now stuck in the Yemen quagmire while indiscriminately bombarding the impoverished stated on an almost daily basis.

Independent estimates put the death toll of the Saudi-led aggression on Yemen at over 13,000 mostly civilians including women, children and the elderly

The organization went on to point out that the country’s ongoing armed conflict, which has just entered its fourth year, had created “ideal conditions” for the spread of the disease.

On Thursday, the UN, too, warned that Yemen was now home to the “world’s largest humanitarian crisis”, with nearly 70 percent of the country’s population in need of aid.

“Some 7.3 million people [in Yemen] are on the brink of famine,” Kate Gilmore, UN deputy high commissioner for human rights, told the UN’s Human Rights Council in Geneva.

According to Gilmore, almost 19 million of Yemen’s total population of 27.4 million “are in need of humanitarian assistance, including 10.3 million in acute need”.

Since April, Gilmore said, over three million people had been forced to flee their homes as a direct result of the ongoing conflict between the Shia Houthi militia group and Yemen’s Saudi-backed government.

The Saudi-led aggression has also virtually destroyed Yemen’s infrastructure and put seven million of the 27-million strong population on the brink of famine.

Tags: cholera Yemen Saudi
Short Link rasanews.ir/201oaU
Share
0
Please type in your comments in English.
The comments that contain insults or libel to individuals, ethnicities, or contradictions with the laws of the country and religious teachings will not be disclosed