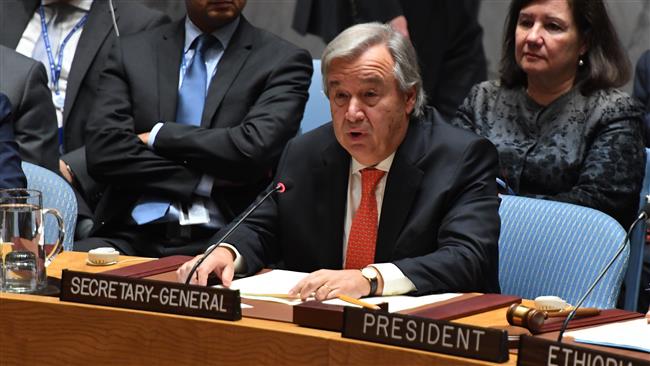 RNA - “The situation has spiraled into the world's fastest developing refugee emergency, a humanitarian and human rights nightmare,” Guterres said in a speech to the UN Security Council on Thursday.

His comments came as more than 500,000 Rohingya refugees have crossed into the neighboring Bangladesh in recent weeks, creating an unprecedented humanitarian crisis as aid agencies struggle to provide food, clean water and shelter. Many of those who have managed to take refuge in Bangladesh say Myanmar's soldiers and Buddhist mobs have been attacking civilians and burning down their homes.

Myanmar’s troops have intensified attacks against Rohingya Muslims in Rakhine state, home to over a million members of the desperate minority, since October 2016. The attacks have seen a sharp rise since August.

The latest bout of violence in Rakhine has killed more than 1,000 people, according to the UN.

The UN has received “bone-chilling accounts” of refugees being subject to “excessive violence and serious violations of human rights, including indiscriminate firing of weapons, the use of landmines against civilians and sexual violence,” Guterres further told the public session of the council, adding, “This is unacceptable and must end immediately.”

The volatile Rakhine state has been the scene of communal violence since 2012. Many of the Muslims have lost their lives while tens of thousands have been displaced as a result of attacks by Buddhists. The refugees largely live in camps in dire conditions.

Suu Kyi is under fire by the international community and rights groups for allowing the government troops and the Buddhist mobs to further impose a violent clampdown on the desperate minority.

Her government denies full citizenship to the Rohingya, branding them illegal immigrants from Bangladesh. Dhaka, in turn, regards the desperate refugees as Myanmarese. The Rohingya, however, track their ancestors many generations back in Myanmar.

The UN chief also called on the Myanmar government to grant nationality to the Muslims of Rakhine state.

“The reality on the ground demands action - swift action - to protect people, alleviate suffering, prevent further instability, address the roots of the situation and forge, at long last, a durable solution,” Guterres added.

He also warned that the “systematic violence” could cause unrest to spill into the heart of Rakhine, threatening 250,000 Muslims with displacement.

Tags: UN Myanmar
Short Link rasanews.ir/201oa0
Share
0
Please type in your comments in English.
The comments that contain insults or libel to individuals, ethnicities, or contradictions with the laws of the country and religious teachings will not be disclosed