Rasa - Israeli forces injured at least seven Palestinians during clashes that erupted between hundreds of Palestinian youths and Israeli forces in the village of Biddu in the occupied West Bank’s Jerusalem district following an Israeli-imposed siege placed on the entire village. 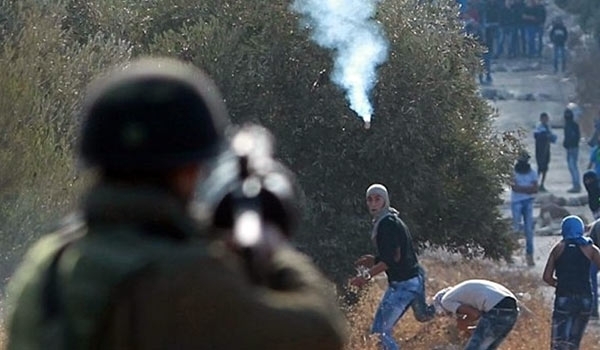 RNA - According to locals, Israeli forces closed the main road, which is also the entrance of the village, between Ramallah and the surrounding villages and towns, causing clashes to erupt with Israeli forces, Maan reported.

Palestinian news agency Wafa said that Biddu was one of several Jerusalem-area villages placed under an Israeli military siege following a shooting attack carried out by a resident of the nearby Beit Surik village on Tuesday, which killed an Israeli border police officer and two Israeli security guards outside Israel’s illegal Har Adar settlement.

The seven injured Palestinians were treated at the al-Karmel Medical Center. Locals told Ma’an that Israeli forces raided the center searching for them. However, the reports did not mention whether any of the Palestinians were indeed detained.

It is typical for Israeli forces to raid hospitals in order to detain Palestinians injured during clashes, forcing some doctors and medical staff to hide or rotate injured Palestinians between hospital rooms in order to properly treat them.

In July, Amnesty International called such Israeli practices “utterly deplorable” after Israeli forces raided the Hadassah hospital in Jerusalem multiple times in order to detain Palestinians who had been seriously injured by Israeli forces.

Israeli raids into Palestinian towns, villages, and refugee camps are a daily occurrence in the occupied West Bank and East Jerusalem. After actual or alleged attacks on Israelis, villages are routinely sealed by Israeli forces, and raids are carried out on a nightly basis.

Due to the typically aggressive nature of the raids, clashes often erupt between local Palestinian youth who throw stones and are met in response with live fire, rubber-coated steel bullets, and tear gas, often resulting in serious, sometimes fatal, injuries.

Tags: Palestinian Israel
Short Link rasanews.ir/201oZt
Share
0
Please type in your comments in English.
The comments that contain insults or libel to individuals, ethnicities, or contradictions with the laws of the country and religious teachings will not be disclosed