Rasa - A large crowd of mourners have held another funeral to pay their final respect to Iranian military advisor Mohsen Hojaji, who was martyred by Daesh Takfiri terrorists, in his hometown of Najafabad. 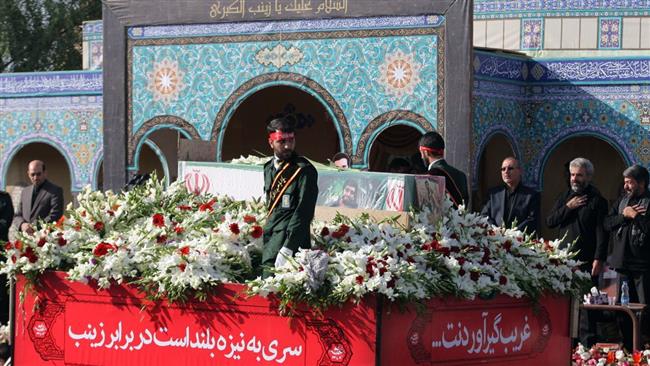 RNA - On Thursday, people from all walks of life, including high-ranking officials, bid farewell to the 25-year-old military advisor in Najafabad in the central Iranian Province of Isfahan, where he was laid to rest.

Many of the mourners had reached Najafabad from other cities to take part in the ceremony.

Aerial footage showed major streets of Najafabad blocked by the large crowds of mourners who participated in the funeral procession.

Hojaji was a member of the Iranian military advisory team, which assists the Syria army in its counter-terrorism operations against Takfiri terrorists. He was taken hostage by Daesh terrorists near the Iraqi border on August 7 and beheaded two days later.

Commemoration ceremonies were previously held for him in the cities of Tehran, Mashhad and Isfahan.

Prior to the funeral ceremony in Tehran on Wednesday, Leader of the Islamic Revolution Ayatollah Seyyed Ali Khamenei performed prayers for the martyr at a mosque in the central part of the capital.

Soon after Hojaji’s martyrdom, General Qassem Soleimani said Iranian forces would not rest until they have taken out every last terrorist from the face of the Muslim world.

The general, who commands the Quds Force of Iran’s Islamic Revolution Guards Corps (IRGC), vowed on September 21 that the terror outfit would be uprooted in two months.

Tags: Mohsen Hojaji Martyr
Short Link rasanews.ir/201oZh
Share
0
Please type in your comments in English.
The comments that contain insults or libel to individuals, ethnicities, or contradictions with the laws of the country and religious teachings will not be disclosed