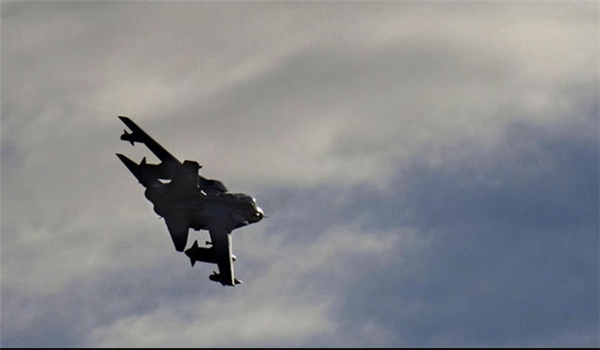 The Syrian state-run TV reported that at least three civilians were killed and five more injured in a US-led coalition airstrike in the Southeastern part of the town of al-Suwar.

The strike has also damaged public and private buildings in the area.

Also in the past 24 hours, more than 50 civilians were killed and dozens of others were wounded in the US-led Coalition airstrikes on Raqqa city and in the two provinces of Deir Ezzur and Hasaka, local sources confirmed.

In the meantime, the Lebanese Arabic-language al-Manar tv network reported that the US fighter jets used white phosphoric bombs in air raids on regions near the ISIL-held town of al-Thowar in Northeastern Deir Ezzur, killing and injuring several civilians.

Also on Wednesday, the Syrian army troops and Air Force continued assault on ISIL in and around the city of Deir Ezzur.

Also, the army's artillery and aircraft targeted ISIL's positions in the village of al-Hosseiniyeh Northeast of Deir Ezzur city and in the neighborhoods of al-Huweiqa, al-Arzi, Khasarat and Kanamat, killing a number of terrorists and destroying their equipment.

Also in the past 24 hours, the Syrian Army troops, backed up by the country's Air Force, repelled ISIL's heavy offensive on the pro-government forces' positions in the Southeastern outskirts of Deir Ezzur city, inflicting major losses on the terrorists.

The army units engaged in fierce clashes with ISIL and warded off the terrorists' attack on their positions in Huweija Sakar region, killing or wounding a number of militants and destroying their equipment.

Also, the army men targeted and destroyed a bomb-laden vehicle of ISIL before hitting their positons in Huweija Sakar.

In the meantime, the army's missile units and aircraft targeted heavily ISIL's positions and movements in Hatlah and al-Hosseiniyeh region and in the neighborhoods of al-Huweiqa, Kanamat, Khasarat, al-Roshdiyeh, al-Arzi and al-Orfi, killing a number of terrorists and destroying their military hardware.

Also on Wednesday, The Russian long-range bombers targeted ISIL's positions in Deir Ezzur province in Eastern Syria and strongholds of the Al-Nusra Front (Tahrir al-Sham Hay'at or the Levant Liberation Board) in Northwestern province of Idlib, inflicting major losses on terrorists, the Russian Defense Ministry announced.

“Tu-95MS strategic bombers have carried out strikes on the facilities of international terrorist groups in Syria. Taking off from the Engels airfield in Russia, the Tu-95s bombers flew over the territory of Iran and Iraq” to perform the mission, Defense Ministry Spokesman Igor Konashenkov said.

The H-101 cruise missiles, fired by the Russian bombers, targeted the most important facilities of ISIL and Al-Nusra (in Deir Ezzur and Idlib provinces), which were uncovered by military intelligence, he added.

“The sudden strikes destroyed the terrorists’ command posts, areas where militants and their equipment were concentrated, as well as ammunition depots,” Konashenkov said, adding that “objective control data confirmed that all targets were struck.”

During the mission, the Tu-95 bombers received Su-30 and Su-35 cover, stationed at the Russian base in Humeimim, Syria, he said.

In order to strike targets in Syria, the bombers covered a distance of around 7,000 kilometers, performing one refueling in the air via Il-78 tankers, the spokesman added.

The airstrikes were carried out in support of a successful offensive on ISIL positions in Deir Ezzur by the Syrian government forces, Konashenkov said.

Five notorious field commanders of the Al-Nusra Front, who led an attack on Russian military police officers in Hama province earlier this month, were killed in an airstrike in Idlib province in Syria, the Russian Defense Ministry said.

The airstrike targeted the commanders of Tahrir al-Sham, a group that was formed after the collapse of Al-Nusra Front terrorist organization, near the city of Idlib, Defense Ministry Spokesman Igor Konashenkov said, RT reported.

Also, 32 militants were killed in the strike, the spokesman said.

The attack on the Russian military police took place in Hama province, 80km from Idlib, on September 18, Konashenkov said.

“Special measures to find and destroy all the militants involved in the attack on Russian troops in Syria continue,” he said.

Also on Wednesday, tens of militants that had earlier handed over their arms to the Syrian Army and applied for government pardoning in Southern Hama received amnesty.

65 militants that had surrendered to the army men in the village of Deir al-Faradis received amnesty from the Damascus government and returned to normal life.

Also in the past 24 hours, a number of Russian-made Uragan self-propelled multiple rocket launcher systems have recently been detected in the Syrian Army troops' positions in Hama province, a Russian media outlet reported.

But the report said the army had not used Uragan rocket launchers in the province.

The Syrian Army troops continued to hit ISIL's defense lines in the Central part of the war-hit country on Wednesday, imposing control over four more villages.

The army men drove ISIL out of the villages of al-Qazileh, al-Rak, Um Huweish and Safiyeh Northeast of Jubb al-Jarah in Eastern Homs.

The army units tightened noose on the ISIL in the Central Syria after their recent advances in Eastern Homs.

Also in the past 24 hours,  the Syrian Army troops continued their operation against ISIL in Eastern Homs, driving terrorists out of three more key villages in the Central part of the war-hit country.

The army men stormed the remaining regions still under ISIL's control in Jubb al-Jarah and captured the villages of Um al-Sous, al-Kharafish and Rasm al-Arnab.

A field source said that a large number of terrorists were killed and ISIL's military equipment was destroyed in the attack.

The source further said that the army's engineering units embarked on defusing landmines and bombs planted by ISIL in the newly-liberated regions.

The Russian Reconciliation Center for Syria said on Wednesday that over 800 gunmen have joined the Syrian government forces in the Northwestern province of Idlib.

The Russian center said that more than 800 gunmen deployed in the Northwestern territories of Idlib province have joined ceasefire and sided with the army men in the war on terrorist groups.

Assassination of commanders of the Free Syrian Army (FSA) has significantly increased after intensified clashes between the FSA and the rival terrorist group of ISIL in the Southern province of Dara'a, a Lebanese media outlet reported Wednesday.

The Arabic-language al-Manar tv network reported that Naser Khalil Mahasenah, commander of the FSA-affiliated Jeish Ababil, was killed along with several of his aids in a booby-trapped attack on his cars on a road connecting the towns of Zamrin and al-Hareh to each other in Northwestern Dara'a.

The news network added that Sharif al-Kayed, another military commander of the FSA, was kidnapped on al-Karak al-Sharqi's road to al-Harak region in the Eastern countryside of Dara'a by unknown attackers.

Al-Manar went on to say that the FSA and the ISIL are engaged in fierce clashes in the towns of Jalin, Hit and Odwan in the Western countryside of Dara'a.

The Syrian Army troops continued their large-scale operation in Eastern Ghouta and captured a large key building block that was used by the terrorists as a regional command center.

The army men engaged in fierce clashes with terrorists in Ein Terma and Jobar regions.

A number of terrorist were killed or wounded and their military equipment were damaged in the clashes and under the heavy fire.

The army men ultimately managed to capture the largest building block in Ein Terma that was one of most important positions of the terrorists and used by them as a regional command center.

Tags: US Syria
Short Link rasanews.ir/201oZf
Share
0
Please type in your comments in English.
The comments that contain insults or libel to individuals, ethnicities, or contradictions with the laws of the country and religious teachings will not be disclosed