Rasa - The Syrian army soldiers repelled terrorists' attack on their positions in Hama province after hours of clashes, inflicting major losses on them. 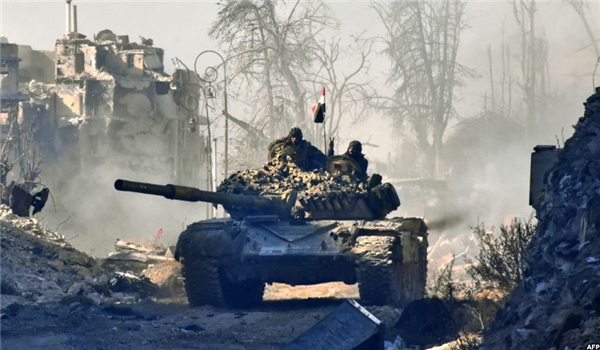 RNA - The Al-Nusra Front (Tahrir al-Sham Hay'at or the Levant Liberation Board) terrorists' attacks to capture the government forces' positions in Northern and Eastern Hama were fended off by the strong defense of the Syrian military men.

Meantime, the Syrian army and popular forces continued their military advances in other parts of Syria, including Homs, over past 24 hours.

The Syrian Army soldiers engaged in fierce clashes with ISIL and Al-Nusra Front (Tahrir al-Sham Hay'at or the Levant Liberation Board) in Northern and Eastern Hama on Tuesday and fended off their attacks.

The Syrian army units clashed with ISIL that attacked the pro-government forces' positions along the oil pipeline South of the village of Aqarib in Eastern Hama and repelled their attack, killing and injuring a number of the terrorists.

Also, the army's artillery units opened heavy fire at Al-Nusra's night movements to prevail over the government forces' defense lines in the village of Tal Dareh in Northern Hama and repelled their offensive.

The Al-Nusra suffered heavy casualties in the failed attack.

The Syrian Army troops continued their advances in Southeastern Homs and pushed ISIL back from more positions in their push towards a key pumping station in Badiyeh (desert) on Tuesday.

The army soldiers stationed in the town of Humeimeh hit ISIL's defense lines in Syria's Badiyeh and deployed in areas near T2 oil pumping station along the road to the town of Albu Kamal in Southeastern Deir Ezzur after imposing control over several positions.

Military sources said on Monday that the army men pushed the ISIL back from the villages of Um al-Rish, Rasm al-Nafeh, al-Zibeh and several hills overlooking the region.

They added that the army has imposed control over 35 sq/km of land after the new advances in Eastern Homs, killing and wounding a number of terrorists.

The remaining pockets of terrorists left behind weapons and ammunitions and fled the battlefield.

Terrorist groups have pulled forces back from ten more checkpoints at Syria's Southern border with Jordan, an Arab media outlet reported on Tuesday.

Relevant reports said earlier that the army units regained control of terrorists' al-Handalat military base near the border with Jordan after the terrorists fled towards al-Rakban military base.

This is while the exit of terrorists from the military base took place after the Syrian army and its allies approached Camp Mouk operations room asked the terrorists to surrender their positions in Badiyeh region.

The Syrian Army troops continued their large-scale operation in Eastern Ghouta and captured several buildings and positions on Tuesday.

Tags: Nusra Syria
Short Link rasanews.ir/201oZH
Share
0
Please type in your comments in English.
The comments that contain insults or libel to individuals, ethnicities, or contradictions with the laws of the country and religious teachings will not be disclosed