Rasa - Lebanon's resistance movement Hezbollah leader said that since the onset, it was necessary to confront the terrorists, threat to prevent the fulfillment of Israel’s plots in the region. 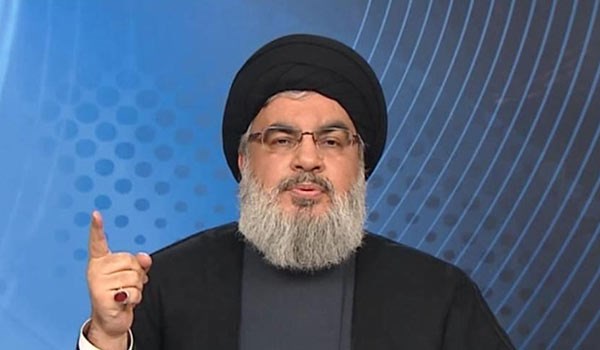 RNA - “What we witnessed during the past years was blind sedition and attacks perpetrated by al-Qaeda, Al-Nusra Front, ISIL and other terrorist groups which were armed,” Sayyed Hassan Nasrallah said during a speech as part of sermons usually delivered during the month of Muharram.

The first ten days of Muharram, the first month of the Islamic Hijri calendar, mark the martyrdom of the third Shiite Imam and the grandson of Prophet Mohammad SAW, Imam Hussein AS, in 680 AD in a battle with Yazid, the tyrant of the time. The tenth day of Muharram, known as Ashura, marks the day when Imam Hussein was martyred with 72 of his loyal companions

During the mourning ceremony organized by Hezbollah at Sayyed al-Shuhada complex in Beirut’s southern suburb, Sayyed Nasrallah said, “Initially, the situation may have been unclear to some, but the Americans supported and provided every type of support to the Takfiris.”

Hezbollah Secretary General wondered what would have been the fate regional states such as Lebanon, Iraq, Syria, Iran and even Persian Gulf if there had not been any initiative to confront the threat posed by the terrorists.

“This was the basis for Ayatollah Sayyed Ali Sistani’s fatwa for confronting the ISIL terrorist group,” Sayyed Nasrallah said, adding had the Iraqi people not adopted this fatwa and defended their homeland, ISIL would have occupied all of Iraq. “Iraq is today close to full victory and liberation,” he added.

Sayyed Nasrallah also wondered what would have befallen Lebanon had the Islamic Resistance not confronted the Israeli enemy.

“It is certain that in Lebanon there would be Israeli colonies and part of the Lebanese people would live in refugee camps outside or inside Lebanon. The prisons would be full of youth and everyone would be living under the Israeli occupation,” Sayyed Nasrallah noted.

The Hezbollah leader pointed out that the resistance, based on its doctrine, stood against the Israeli enemy to defend justice and emerged victorious.

Tags: Sayyed Hassan Nasrallah Nasrallah Hezbollah
Short Link rasanews.ir/201oYX
Share
0
Please type in your comments in English.
The comments that contain insults or libel to individuals, ethnicities, or contradictions with the laws of the country and religious teachings will not be disclosed