Saudis Cozying Up to the Israeli Regime, Official Ties Imminent?

Rasa - The Saudi Foreign Minister has once again hinted at rapprochement between Arabs and the Israeli regime echoing remarks by the regime’s premier Benjamin Netanyahu. 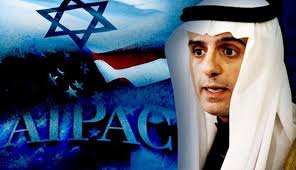 RNA - In his speech to the United Nations General Assembly on Saturday, Saudi foreign minister Adel Al Jubeir pointed to the so-called Palestinian-Israeli conflict, describing it as “the most protracted conflict in our region" of which "nothing can justify continuation”.

According to said Bahrain and Israel are already working to set up exchange visits of businessmen and religious figures, and even of ministers.

Earlier this week, Israeli newspapers quoted a prominent rabbi who met with Bahrain’s King Hamad bin Isa Al Khalifa as saying that the king told him he opposed the Arab states’ boycott of Israel and intended to allow citizens from his kingdom to visit Israel.

Speaking earlier this year, Israel's regime’s spying and transportation minister called on Saudi Arabia's King Salman to invite Prime Minister Benjamin Netanyahu to Riyadh to establish full diplomatic relations. In other remarks earlier this month, Netanyahu said that cooperation between Israel and the Arab states had never been closer.

Last year, there were reports of al-Jubeir’s secret visit to Tel Aviv to meet accompanied by a senior Saudi intelligence official.

Al-Jubeir, who served as the Saudi Ambassador to the US from 2007 to 2015, reportedly established close ties with infamous US Zionist lobby organization (AIPAC) which he still maintains.

In what appears to be a follow up of al-Jubeir’s visit, Zionist media outlets reported early this month that, an unidentified Saudi prince conducted a secret visit to Israel in a bid to repoprtedly restart the stalled Arab-Israeli peace process..

“A prince of the Saudi Royal Court paid a secret visit to the country in recent days to discuss ideas for advancing regional peace with senior Israeli officials,” the Israeli Radio reported.

Egypt and Jordan, both Saudi allies, with whom the Israeli regime signed agreements in 1979 and 1994 respectively, are currently the only two Arab states to have official relations with the Tel Aviv regime.

The establishment of ties between Israeli regime and Persian Gulf monarchies is a policy being pushed by US President Donald Trump and his visit to Riyadh and then straight to Tel Aviv in May this year was within actualizing that approach.

The account, which is believed to be reporting from inside the ruling family in Saudi Arabia, wrote: “Arrangement among the UAE, Egypt, Saudi Arabia and Bahrain is wider than our expectations. Israel and American bodies linked to Trump are involved.”

“The plan is complete. It is based on unifying the bases of security, media, culture and education, including religion, in Egypt and all the Persian Gulf States except Oman.”

The plan, according to Mujtahid, was drawn in Egypt which is the “supplier of cadres who will deal with the issues of media, security, Islamic movements, education syllabuses and religious institutions.”

According to Mujtahidd, it aims to “distance any political, cultural, educational, financial, religious effect on the people of Egypt and the Persian Gulf States in order to reach a state of full and eternal normalization with Israel.”

Arab states and especially Saudi Arabia is warming up to the Israeli regime at the expense of Palestinians who are struggling to liberate their lands, particularly the Al Aqsa Mosque-the third holiest site in Islam, currently under the occupation of the Israelis.

Tags: Israel Saudi
Short Link rasanews.ir/201oYK
Share
0
Please type in your comments in English.
The comments that contain insults or libel to individuals, ethnicities, or contradictions with the laws of the country and religious teachings will not be disclosed