Rasa - The head of the UN refugee agency says Bangladesh needs "massive international assistance" to feed and shelter over 430,000 Rohingya Muslims who have fled Myanmar in recent weeks. 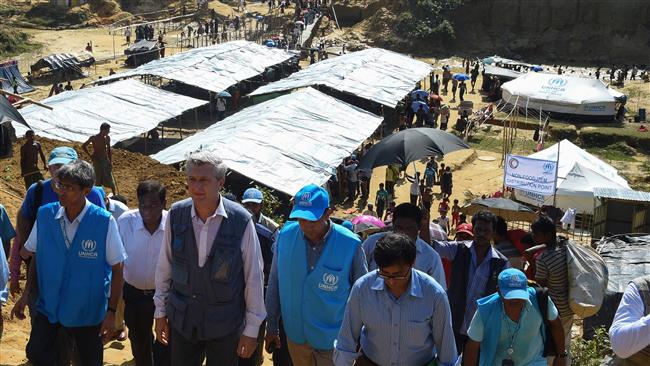 RNA - UN High Commissioner for Refugees Filippo Grandi said on Sunday that there were "immense" challenges at the overflowing Rohingya refugee camps around Cox's Bazar in southern Bangladesh.

"I was struck by the incredible magnitude of their needs. They need everything, they need food, they need clean water, they need shelter, they need proper health care," Grandi said after visiting the camps.

The UN official said there had been an "incredible outpouring of local generosity" but that now needed to be "beefed up by massive international assistance, financial and material." He said his office was providing "technical assistance" to help Bangladesh register the Rohingya. "That's partly why I am here, to help... the government organize that response."

The scale of the influx, which the UN official called the "fastest and most urgent refugee emergency in the world," had made it difficult to assess the needs quickly.

Elsewhere in his remarks, Grandi said the influx had slowed in recent days but it was impossible to tell whether more would come.

The latest figures by the UN show that 436,000 Rohingya had arrived from Myanmar's Rakhine state since an outbreak of violence there a month ago.

Meanwhile, Amir Hossain Amu, a senior Bangladeshi minister, said on Sunday that the country had "no plan for the time being" to grant refugee status to the newly-arrived Rohingya.

Amu, who chairs a cabinet committee on national security, said, "We want Rohingya to return to their own land."

Bangladesh has begun providing those who have just arrived with identity cards and recording their biometric data. The process is expected to take several months to complete.

At the moment, UN agencies say it is difficult to ensure aid is distributed evenly because refugees are undocumented. They are still moving from one place to another.

Over the past month, thousands of Rohingya have fled from the brutal army-led crackdown across the border in Rakhine. The recent exodus of Rohingya has brought the number of refugees from Rakhine living in Bangladesh to over 800,000.

Myanmar's government claims it is fighting militants in the area, but the UN says the situation is better described as the “ethnic cleansing” of the Rohingya Muslims, whom the government refuses to recognize as citizens despite the fact that the 1.1-million-strong population has been living in the country for generations.

Tags: Muslim Rohingya UN Myanmar
Short Link rasanews.ir/201oYB
Share
0
Please type in your comments in English.
The comments that contain insults or libel to individuals, ethnicities, or contradictions with the laws of the country and religious teachings will not be disclosed