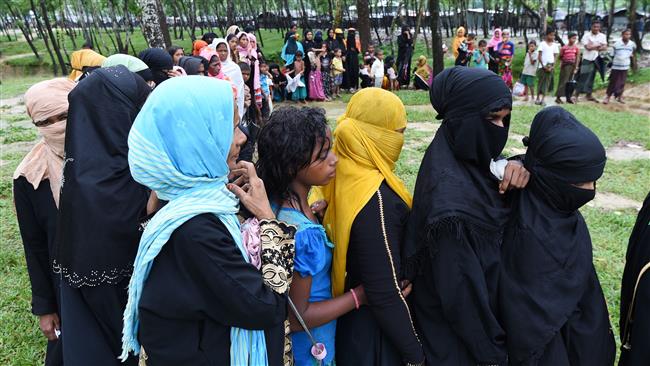 RNA - Doctors treating Rohingya Muslims in Bangladesh reported dozens of cases consistent with violent sexual attacks, including cases where firearms had been used to violate women.

International Organization for Migration (IOM) medical officer Tasnuba Nourin said she had treated at least five women who appeared to have been recently raped. The physical injuries were consistent with the patients’ accounts of what had happened, according to the UN doctor at the Leda makeshift refugee camp in Teknaf, Bangladesh.

Another IOM doctor working at one of those clinics near the Kutapalong refugee camp, who asked not to be identified, reported lacerations and cuts.

There had already been reports of widespread abuse by the Myanmarese soldiers and Buddhist mobs in a western state in Myanmar where the military has laid siege to the Muslims.

The government in Myanmar has flatly denied the rape allegations against its soldiers, who have been committing horrendous abuse against the minority Rohingya Muslims in the western Rahhine State.

Meanwhile, the government in Bangladesh has banned telecommunication companies from selling mobile phone connections to the Rohingya Muslim refugees fleeing violence in Myanmar, imposing a communication blackout on the persecuted community.

Bangladesh’s four mobile phone providers were threatened with fines if they provide any of the nearly 430,000 newly-arrived refugees from Myanmar with SIM cards while the ban is in force.

“For the time being, they can’t buy any SIM cards,” Enayet Hossain, a senior officer at the Bangladeshi Telecoms Ministry, told AFP on Sunday.

The decision, taken on Saturday, was linked to “security” concerns, according to Junior Telecoms Minister Tarana Halim.

“We took the step (of welcoming the Rohingya) on humanitarian grounds but at the same time our own security should not be compromised,” Halim said, without elaborating on what specific security risk the refugees posed.

Bangladesh reportedly also prohibits the sale of SIM cards to those of its own citizens who cannot provide an official identity card.

Bangladesh’s telecoms authority said the ban could be lifted once biometric identity cards were issued to the newly-arrived refugees, a process the army says could take six months.

Nearly 430,000 refugees have been led into a handful of overstretched camps in Bangladesh near the border with Myanmar. Humanitarian groups have issued numerous warnings regarding the dire shortages of food, water, shelter, and toilets in the camps.

Roadblocks have been set up along major routes from the camp zones to stop the refugees from moving further into Bangladesh.

The United Nations has described the practices against the Rohingya Muslims in Buddhist-majority Myanmar as “ethnic cleansing.”

Tags: Rohingya Myanmar
Short Link rasanews.ir/201oY4
Share
0
Please type in your comments in English.
The comments that contain insults or libel to individuals, ethnicities, or contradictions with the laws of the country and religious teachings will not be disclosed