Rasa - Syrian Foreign Minister Walid al-Muallem says Damascus is close to victory in its fight against foreign-sponsored terrorism which has wreaked havoc on the nation over the past six years. 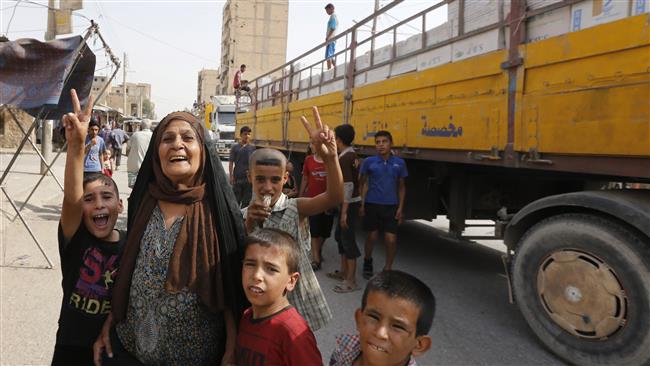 RNA - “My country, along with its steadfast people and its brave army and supported by our loyal allies, is marching steadily towards the goal of rooting out terrorism. The liberation of Aleppo and Palmyra, the lifting of the siege on the city of Dayr al-Zawr and the eradication of terrorism from many parts of Syria prove that victory is now within reach,” Muallem said in his speech at the UN General Assembly on Saturday.

The Syrian diplomat warned about the spillover of Takfiri terrorism to other parts of the world, calling for concerted effort by the international community to eradicate the phenomenon.

“We must all understand that terrorism and the underlying Takfiri extremist ideology will continue to spread like a tumor throughout the world and wound our own people, unless every one of us demonstrates a genuine will to cooperate to confront it together,” he said.

“Every such measure must respect the sovereignty of states and the interests of the people. We must let go of the illusion that terrorism can be used as a tool for political gains and narrow interests,” the top Syrian diplomat added.

He also lashed out at Israel for continuing its “unscrupulous thuggish actions with full impunity” against civilian population in Syria and Palestine.

“Israel did not stop there. It has interfered in the Syrian crisis since its early days. Israel has provided all forms of support for Takfiri terrorist gangs, including funds, weapons, material and communication equipment. Israel has also bombed Syrian army positions to serve terrorist agendas,” the Syrian foreign minister said.

“The unlimited Israeli support to terrorists in Syria did not come as a surprise. After all, the two share the same interests and goals,” he added.

Muallem criticized the massive human rights violations and destruction of Syria’s infrastructure by the US-led coalition claiming to be fighting the Daesh Takfiri terrorist group.

“It is quite ironic that those are the same countries which are shedding the blood of thousands of Syrians by supporting terrorists, bombing innocent civilians and destroying their livelihoods,” he said.

“The so-called international coalition led by the US, which was created there three years ago to allegedly fight terrorist groups such as ISIL (Daesh), has killed much more innocent Syrians, mostly women and children, that terrorists [did] and destroyed the vital infrastructure that Syrians have worked for years to build. It has also used phosphorous bombs and other internationally-prohibited weapons before the eyes of the whole world,” he said.

Muallem also slammed the “international community’s silence” over the crimes committed by the US-led coalition in Syria and argued that any foreign presence in Syria without the approval of the government in Damascus constitutes an act of “occupation, flagrant violation of … international law and the UN Charter.”

The Damascus government and opposition groups have held six rounds of talks, brokered by Iran, Russia and Turkey, in the Kazakh capital city of Astana in a bid to end the foreign-backed militancy in Syria, which broke out in March 2011.

The Astana negotiations have so far resulted in an agreement on four de-escalation zones across Syria, which have sharply reduced fighting in the conflict zones.

The talks in Astana come as the UN has also held seven rounds of negotiations in the Swiss city of Geneva, which have achieved little success in comparison with the Astana talks.

Tags: US Syria
Short Link rasanews.ir/201oXr
Share
0
Please type in your comments in English.
The comments that contain insults or libel to individuals, ethnicities, or contradictions with the laws of the country and religious teachings will not be disclosed