US vs. North Korea: World Must Take Trump and Kim at Their Word

Rasa - North Korea was doing fine until President Donald Trump and his warmongering cabal showed up. 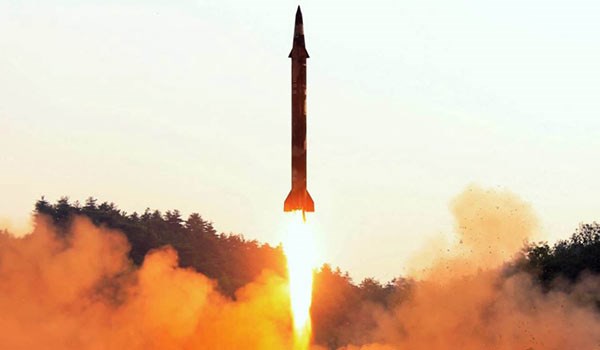 RNA - Now all we hear is this: North Korean and American leaders spar, concerns increase, and calls for peaceful negotiations grow louder. While the majority of world community – and Americans - disapprove of Trump's handling of current tensions between the US and North Korea, he has so far refused to engage in diplomacy with Kim Jong-un. Far from it, President Trump and North Korean Leader Kim Jong-un have traded insults, continuing a war of words that's gone on for months, causing widespread anxiety over the possibility of a nuclear attack as North Korea conducts missile tests and Trump administration officials attempt to do damage control regarding the president's threats of retaliation.

The two leaders' statements have grown increasingly antagonistic, with Trump giving Kim the nickname "Rocket Man" and Kim introducing the arcane term "dotard" into the discourse. After Trump's speech at the United Nations General Assembly in which he threatened to "totally destroy North Korea" if the Kim regime continues to test its nuclear capability, as it's done five times since July, Kim issued a lengthy statement comparing Trump’s threats to the barks of "a frightened dog."

Kim added that Trump "surely is a rogue and a gangster fond of playing with fire, rather than a politician," and called him a "mentally deranged US dotard," using a relatively obscure word that Merriam-Webster defines as "a state or period of senile decay marked by decline of mental poise and alertness."

But what next? Certainly a nuclear war can and should always stay off the table. The world has had enough of US warmongering in the Middle East and North Africa. Last thing it wants to see is nuclear Armageddon on the Korean Peninsula. The same argument could be made about imposing economic and financial sanctions. But the Trump White House has gone and done just that.

The US has already announced its latest round of sanctions on North Korea, penalizing foreign companies from doing business with the country and adding to the impact of its food shortage. This is while a large number of diplomatic officials and prominent activists have called for peaceful negotiations between the US and North Korea. US Defense Secretary James Mattis has even warned against military action on North Korea, and on Friday nearly 300 female leaders from 45 countries called on the UN secretary-general to appoint a special envoy to de-escalate the brewing tension. Last but not the least, in a new poll conducted by Ipsos, 51 percent of Americans said they didn't approve of how Trump has been handling North Korea's nuclear threats.

Indeed, a necessary step at this point is for UN Secretary-General António Guterres to appoint a special envoy to spearhead diplomacy and work towards an official end to the Korean War with a peace treaty. Not many at the UN support warmongering by Trump, who is using the North Korean nuclear threat to justify more militarization, such as revoking Article 9, which threatens the security of the entire region. That’s completely unnecessary.

The special envoy should at the same time support a so-called freeze-freeze proposal that entails North Korea halting its missile tests in change for the US to halt its military threats and exercises with South Korea. Strange enough, US Ambassador to the UN Nikki Haley has dismissed this proposal as "insulting" which is not surprising at all.

At any rate, the world wants "diplomacy, not war with North Korea," and on the heels of the first legally-binding treaty prohibiting nuclear weapons opening for signature, with more than 50 UN member states signing on. Sad to say, the US and other nuclear-armed regimes boycotted the signing ceremony.

Still, there is no other way to stop President Trump and the neo-conservatives from moving the world closer to a nuclear war. The biggest mistake is to take Trump’s chilling speech at the UN lightly, or worse, view the speech as a television spectacle to be rated rather than a threat to world peace. US neo-conservatives who had led the US into the disastrous wars on Afghanistan, Iraq, Syria and Yemen, such as former Ambassador John Bolton, cheered. So too did Israeli Prime Minister Benjamin Netanyahu, who recklessly and relentlessly itches for the US to destroy Iran.

As is, the War Party in Washington has done it before and it can do it again by launching a new war against nuclear-armed North Korea. Even if such conclusion is bluster and bluff, the consequences can be the same. The game of chicken often ends in disaster. It is time for the international civil society to take Trump and Kim at their word and call for peaceful negotiations. They mean what they say. Now just one nuclear warhead can do the job.

Tags: Korea US Missile
Short Link rasanews.ir/201oXh
Share
0
Please type in your comments in English.
The comments that contain insults or libel to individuals, ethnicities, or contradictions with the laws of the country and religious teachings will not be disclosed