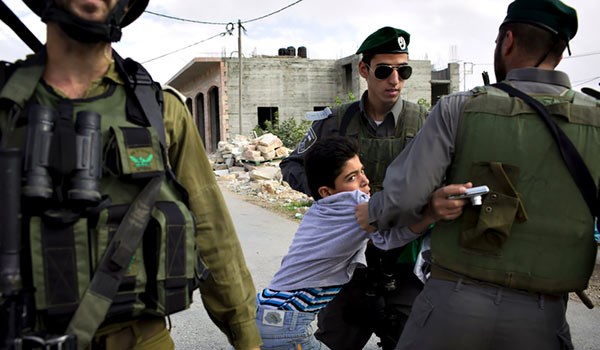 RNA -  Infantry units from the Israeli army backed by military patrols stormed the city of Hebron and the nearby al-Aroub refugee camp during the predawn hours and proceeded to carry out search operations before detaining a Palestinian from his home in al-Salam street, near Hebron city, WAFA reported.

Forces also detained a 25-year-old youth after raiding and searching his home in Dheisheh Refugee Camp South of Bethlehem.

Meanwhile, Clashes erupted at the Northern entrance of Bethlehem city between Israeli forces and Palestinians, where the former opened fire at residents, however, no injuries were reported.

A Palestinian seeking treatment in Jordan was also detained as he attempted to cross Allenby bridge connecting the West Bank with Jordan.

Meanwhile, five Palestinians were reportedly detained late Friday night during an Israeli military raid into Joyous village, Northeast of Qalqilya. The five were led to an unknown destination.

Meanwhile in Jenin area, forces carried out raid and search operations in search for wanted Palestinians accused of allegedly throwing rocks at Israeli military checkpoints stationed near Tura and Umm ar-Rehan villages, in Jenin, in the Northern West Bank.

Tags: Palestinian Israel
Short Link rasanews.ir/201oXR
Share
0
Please type in your comments in English.
The comments that contain insults or libel to individuals, ethnicities, or contradictions with the laws of the country and religious teachings will not be disclosed