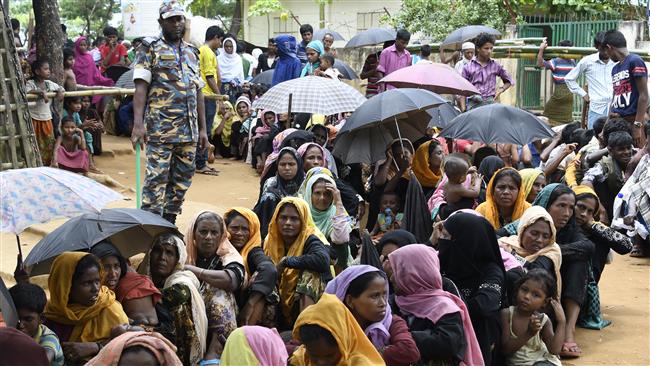 RNA - According to state-backed Global New Light of Myanmar newspaper, an International Committee of the Red Cross (ICRC) ship carrying 50 tonnes of aid was halted by a 300-strong Buddhist mob in the state capital Sittwe on Wednesday night.

The group forced the ICRC ship to unload the aid and prevented the vessel from leaving, the newspaper reported quoting Myanmar's Information Committee.

The crowd hurled "stones and Molotov (cocktails)" at riot police on the scene, injuring several officers, the report added.

Meanwhile, Graziella Leite Piccoli, ICRC spokeswoman for Asia, confirmed the incident and said its staff were not injured, vowing to continue to try to deliver aid."We will carry on, nothing has been put on hold."

Separately, a truck hired by the Red Cross and ICRC crashed in Bangladesh, killing nine people and injuring 10 others.

Yasir Arafat, deputy police chief of Bandarban border district, said the truck “was carrying the food to Rohingya refugees on the border, including those stranded in the no-man's land."

Tensions remain high across Rakhine, where a massive army crackdown has driven over 420,000 people into neighboring Bangladesh, in what the UN has called a campaign of "ethnic cleansing."

Thousands of Muslim Rohingyas are feared trapped in the hard-hit areas of Rakhine state, while humanitarian agencies in neighboring Bangladesh are strained by the massive refugee influx.

Rohingya refugees have streamed into Bangladesh since the end of August, cramming into ill-equipped camps and makeshift shelters near the border town of Cox's Bazar.

The crisis has prompted a global chorus of condemnation against Myanmar's government for the renewed violence, which French President Emmanuel Macron has called "genocide."

Myanmar's de facto leader, Aung San Suu Kyi, has come under fire for downplaying the violence and failing to condemn the military crackdown against the Rohingya Muslims.

In a major speech on his first visit to Rakhine state since the latest violence erupted there, Myanmar’s army chief on Thursday called for people internally displaced by violence in Rakhine to go home and rebuild communities.

Senior General Min Aung Hlaing, however, made no mention of 422,000 Rohingya Muslims who fled to Bangladesh to escape his force’s operations.

The government says 400 people have died in the fresh violence, but the UN says well over 1,000 have likely been killed.

Myanmar's government forces do not even spare the fleeing Rohingya refugees. Recent reports by Amnesty International and Bangladeshi officials say the military plants landmines on the path of those trying to cross into Bangladesh, causing them to sustain serious wounds or lose their limbs.

But the brutality against the Rohingya has its roots in the very fact that Myanmar does not recognize them as citizens and has denied citizenship rights to more than one million members of the community for several decades, alleging they are Bengalis who have in the past migrated to the country from Bangladesh. The Rohingya were stripped of their citizenship in 1982 despite having lived in the country for generations.

The UN has said that the Rohingya are one of the most persecuted minorities in the world.

Tags: Rohingya Myanmar
Short Link rasanews.ir/201oXA
Share
0
Please type in your comments in English.
The comments that contain insults or libel to individuals, ethnicities, or contradictions with the laws of the country and religious teachings will not be disclosed