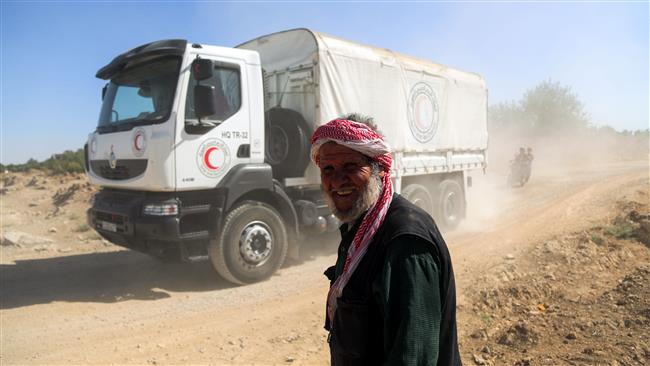 RNA - The Lebanese resistance movement Hezbollah, an ally of the Syrian military in the ongoing fight against terrorists, said on Wednesday that a person was injured in the mortar attack on the convoy traveling through the province of Dayr al-Zawr.

Hezbollah said on its al-Manar website that the attack also caused material damage to nearby buildings and facilities. However, the resistance movement said, 1,000 tonnes of cargo remained intact.

Iran has been a main supplier of humanitarian aid to Syria, where millions of people have been affected by years of brutal militancy. The Iranian government has flown cargoes of aid to various parts of Syria concurrent with the government's ongoing operations to liberate cities and towns from militants.

The Syrian government and allies, including Hezbollah and the Russian air force, have managed to recapture key positions from Daesh in Dayr al-Zawr. The Takfiri terrorist group has been purged from most of the provincial capital, which goes by the same name, and the operation continues to retake other areas to the east and north of the city.

Iran has repeatedly rejected claims that it is helping the Syrian government militarily, saying it has only deployed advisors to help the government in the battle against foreign-backed militants.

The Iranian aid convoy targeted by Daesh on Tuesday was destined for areas recaptured recently in Dayr al-Zawr. It was not clear when the convoy would resume its trip to the areas affected by violence.

Tags: DAESH Iran Syria
Short Link rasanews.ir/201oX1
Share
0
Please type in your comments in English.
The comments that contain insults or libel to individuals, ethnicities, or contradictions with the laws of the country and religious teachings will not be disclosed