Rasa - Iran is due to send its second cargo of humanitarian aid to Myanmar's Muslim refugees in Bangladesh on Thursday. 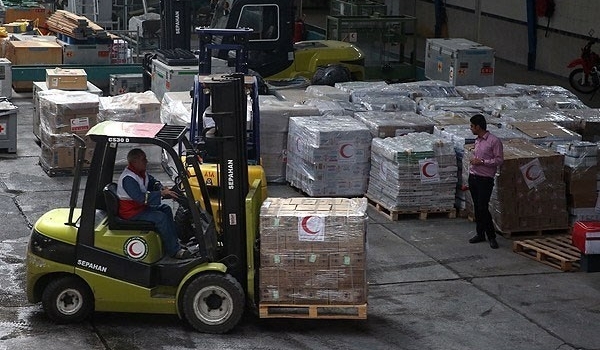 RNA - Commander of the Iranian Air Force's Shahid Lashkari Base General Pilot Mohammad Tasviehchi told reporters on Wednesday that the cargo will be sent to Bangladesh to be distributed among the oppressed Rohingya Muslims.

He underlined that Iran has decided to send a cargo of humanitarian aid to Myanmar Muslims every week.

Noting that at present 100 tons of aid have been stockpiled and stored to be sent to the refugees, General Tasviehchi said that any cargo which is dispatched to the Myanmar Muslims consists of 30 tons of aid, including blankets, tents, canned food, medicine and other necessary goods.

"The convoy was sent to Bangladesh by the collaboration of the General Staff of the Armed Forces of the Islamic Republic of Iran and Iran Air Force," Head of Relief and Rescue Organization of Iran's Red Crescent Organization Mortza Salimi told reporters.

He pointed to Myanmar government's blocking of humanitarian aid sent by Iran, and said, "They were sent by support of Iran's mission in Bangladesh."

Prior to the 2015 Rohingya refugee crisis and the military crackdown in 2016 and 2017, the Rohingya population in Myanmar was around 1.1 to 1.3 million. They reside mainly in the northern Rakhine townships.

Many Rohingyas have fled to neighboring states. More than 100,000 Rohingyas in Myanmar live in camps for internally displaced persons, not allowed by authorities to leave.

Tags: Muslim Myanmar
Short Link rasanews.ir/201oWo
Share
0
Please type in your comments in English.
The comments that contain insults or libel to individuals, ethnicities, or contradictions with the laws of the country and religious teachings will not be disclosed