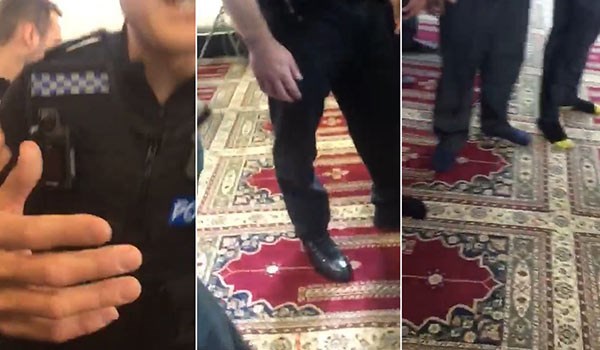 RNA - Police said they were called to the Townfield Mosque in High Wycombe, Buckinghamshire, following reports of an altercation, but found themselves embroiled in one themselves after failing to remove their footwear, RT reported.

The mobile phone footage taken by one onlooker shows a group of male and female police officers entering the mosque with their shoes on, breaking the Islamic custom of removing them.

Worshippers are expected to go barefoot inside the mosque as a gesture of cleansing themselves before starting prayer, as well as to keep the holy space clear of dirt.

One worshipers in the footage can be heard shouting “get them out.”

Although one officer appears to try and explain why they are there, the worshippers pay no attention, attacking the authorities’ apparent disrespect for their religious customs.

The man filming follows one officer and tells viewers “this man thinks he’s a bad man,” while one officer can be heard telling the worshippers to “chill.”

A female police officer then comes into view. The man filming asks why men are speaking to her.

An announcement over a tannoy tells worshippers they should make their way out of the mosque.

Zafar Iqbal, former chairman of the Wycombe Islamic Mission, told the Bucks Free Press: “There was a lot of shouting but there was no need to call the police.

“When they arrived there were around 400 to 500 people here for prayers so the whole road had to be closed.”

A Thames Valley Police spokesman said: “Officers were called on Friday at about 1.40pm following reports of an altercation at a mosque in Totteridge Road, High Wycombe.

“Officers were responding to an immediate call for assistance and as a result, and to prevent any serious harm to individuals or any further outbreak of violence, officers entered the mosque, and spoke to people who were present.

“An allegation of assault was recorded and officers are carrying out an investigation into the incident. No arrests have been made at this time.”

Tags: Muslim Mosque UK
Short Link rasanews.ir/201oWh
Share
0
Please type in your comments in English.
The comments that contain insults or libel to individuals, ethnicities, or contradictions with the laws of the country and religious teachings will not be disclosed