Rasa - Iranian President Hassan Rouhani in a meeting with Swedish Prime Minister Stefan Lofven in New York described the situation of the Muslims in Myanmar as "shocking", and called for the European states' help to stop their massacre and plights. 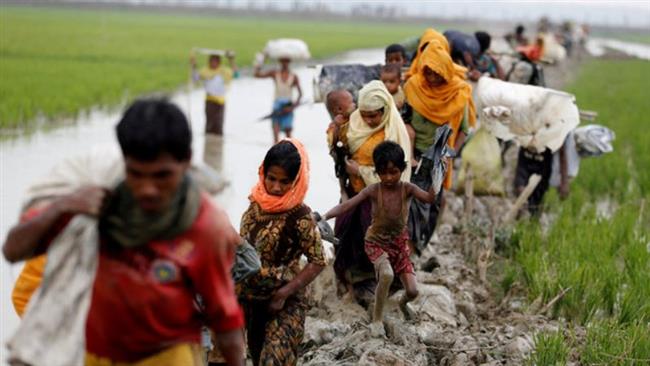 RNA - "Hard conditions have been imposed on Myanmar Muslims and 400,000 people have been displaced. Pressures on Myanmar government to stop genocide and violence against Muslims are necessary, and undoubtedly, the EU plays an important role to stop inhumane pressures on Muslims in Myanmar and help the displaced people," Rouhani said during the meeting on the sidelines of the UN General Assembly conference on Monday evening.

He also referred to the pains and displacement of thousands of Yemeni people as a result of the Saudi-led war against the country, and expressed the hope that negotiations among the Yemeni groups would start soon after the ceasefire and Europe would help security of this region.

Lofven, for his part, described the situation of Myanmar Muslims as tragic, and said his country will do whatever it can to stop this tragedy, specially through efforts at the UN Security Council.

In relevant remarks last Tuesday, Supreme Leader of the Islamic Revolution Ayatollah Seyed Ali Khamenei strongly blasted the international bodies and those who claim to be advocates of human rights for silence on the plights and pains of Muslims in Myanmar, and called on the Islamic countries to adopt practical measures against the Myanmar government.

"Of course, religious prejudice may play a role in this incident but it is a political issue because it is executed by the Myanmar government which is headed by a cruel woman who has won the Nobel prize, and actually the Nobel Peace Prize died with such incidents," Ayatollah Khamenei said.

Tags: Rouhani Myanmar EU
Short Link rasanews.ir/201oWP
Share
0
Please type in your comments in English.
The comments that contain insults or libel to individuals, ethnicities, or contradictions with the laws of the country and religious teachings will not be disclosed