Rasa - Syrian President Bashar al-Assad says “certain Western countries” still support, directly or indirectly, terrorist organizations and groups in Syria despite the fact that this wrong policy has already backfired on their governments and people. 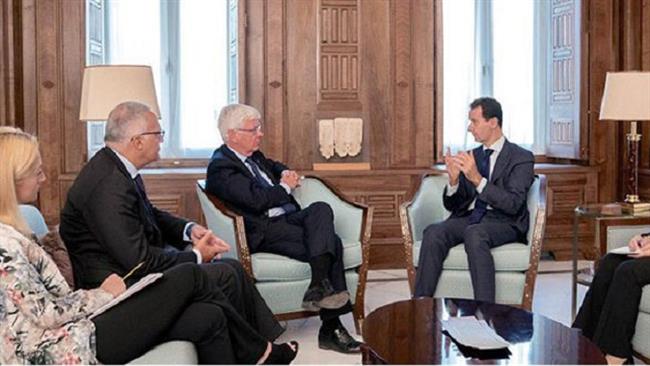 RNA - The Syrian president made the comments in a meeting with an Italian parliamentary delegation headed by Mario Romani, a member of the Senate of the Republic, in the capital Damascus on Sunday, Syria's official news agency, SANA, reported.

President Assad said such visits by the European delegations to Syria, with the aim of getting acquainted with the facts on the ground, could play a significant role in raising the awareness of the Western public opinion about the realities of the crisis in Syria and expose the lies told by the Western mass media in this regard.

The Italian delegation had visited a number of areas in Syria in an attempt to obtain firsthand experience of what the situation was like in the war-torn country before meeting with the Syrian president.

Assad said such awareness-raising steps taken by the international community could pave the way for lifting the economic siege that has increased the suffering of the Syrian nation and negatively affected their livelihood. The Syrian president also described the embargo imposed on his country by “certain superpowers,” to be in blatant violation of international and humanitarian laws.

The Italian delegation, for its part, expressed solidarity with the Syrian people in their war against foreign-sponsored terrorism, acknowledging that the militancy in the Arab country had started to affect a number of European states by posing a real threat to the security, safety and future of their citizens.

Members of the visiting Italian delegation also asserted that they would spare no effort to convey the realities of the crisis in Syria back to the European country and to the rest of the continent.

Earlier in the day, Syrian Foreign Minister Walid al-Muallem met with the Italian delegation, stressing that his country would continue fighting terrorism until the entire Syria was cleared of terrorists. The top diplomat also stated that his country supported all efforts to find a political solution to the crisis through dialogue among the Syrians without any external interference.

Different foreign-backed terrorist groups have been wreaking havoc in Syria since 2011. The Damascus government has repeatedly blamed certain foreign countries for the spread of the devastating militancy.

The government controls main urban centers in the west of the country and has recaptured much of the eastern parts of Syria from Takfiri terrorists in recent months.

Syrian forces managed to reach Dayr al-Zawr’s provincial capital of the same name, which lies on the western bank of the Euphrates River, earlier this month, breaking a nearly three-year-old siege by Daesh terrorist group on government-held parts of the city.

On September 12, Lieutenant General Aleksandr Lapin, the Russian chief of staff in Syria, announced that Damascus was in control of 85 percent of the Arab country’s territories. He added that Syrian forces must now purge terrorists from the country's remaining 15 percent, which amounts to 27,000 square kilometers.

Tags: Terror Assad Syria
Short Link rasanews.ir/201oVh
Share
0
Please type in your comments in English.
The comments that contain insults or libel to individuals, ethnicities, or contradictions with the laws of the country and religious teachings will not be disclosed