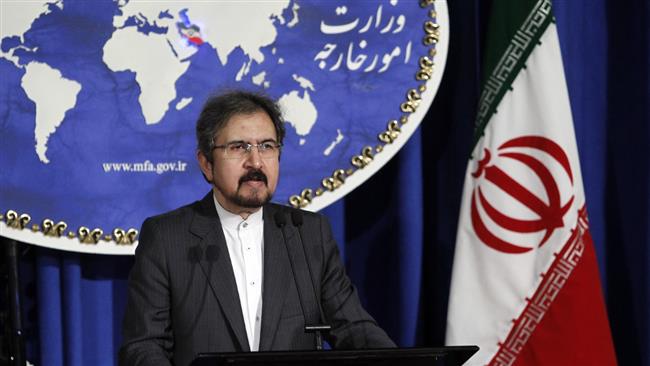 RNA - "No doubt remains that after clear oppositions and protests voiced by the clear conscience people of the globe against the sale of British weapons which are used by Saudi Arabia against the people of Yemen,” Qassemi said on Saturday.

He underlined that the British statesmen are still selling and dispatching lethal weapons to a country which is aggressing and involved in the war of Yemen, and to the terrorists who have been formed and cared by them.

Qassemi pointed to Saudi Foreign Minister Adel al-Jubeir's recent allegations against Iran, and said, "Jubeir's remarks are ridiculous and rooted in negligence about Iran's security which is based on independence of security strategies and has no link whatsoever to terrorist and extremist ideologies; the two factors who lack is suffered by the Saudi rulers."

In late July, The High Court in London ruled that British arms sales to Saudi Arabia are lawful, dismissing a judicial review filed by Campaign Against Arms Trade (CAAT), which had demanded that weapons exports be halted over humanitarian concerns and war crimes.

One way or another, this makes the rule of International Law become a farce, a fig leaf to enable Britain to sell arms and outsource illegal wars to Persian Gulf client states – just like the United States. It’s a waste of time, therefore, for CAAT to appeal the ruling – it will once again be decided on the basis of largely secret evidence supplied by the UK government, heard in closed court. This is not open justice: it is evidence of how the British foreign policy establishment abuses national security and global war on terror as a carte blanche to protect themselves from legal accountability.

The same thing is happening in the United States. According to a former senior war crimes advisor to the US State Department, US arms sales to Saudi Arabia are prohibited under US laws due to credible allegations of illegal actions during the American-British bombing campaign in Yemen. The analysis is set out in a compelling white paper published in May by Professor Michael Newton, who teaches the International Law Practice Lab at Vanderbilt University Law School. The American Bar Association sent Newton's paper to the US Senate saying that questions had arisen concerning whether the sales were consistent with US statutory obligations. Unfortunately, despite the robustness of the legal argument, it did not prevent President Trump from selling the sale of over $100b worth in arms to Saudi Arabia last month.

This hugely embarrassing sale comes after human rights groups, the European parliament, and the United Nations all expressed concerns about Saudi-led coalition attacks against Yemen. Lawyers acting for the CAAT have also stepped up legal proceedings against the Department for Business, Innovation and Skills, which approves export licenses, accusing it of failing in its legal duty to take steps to prevent and suppress violations of International Humanitarian Law. They argue that the UK government has breached international, EU and its own domestic laws by selling arms to Saudi Arabia that were used in its military campaign against civilians in Yemen.

No doubt the Saudi-led war against the poorest country in the Arab world has been fueled in part by British weapons and American intelligence and aerial refueling. It has repeatedly hit civilian targets, including schools, marketplaces, weddings, hospitals, and places of worship. Civilian deaths are estimated to have reached 20,000, with 40,000 injured. In response, the British government has simply increased its sale of precision-guided bombs to Saudi Arabia.

Nor is that all. The UK-backed blockade also checks the flow of food and medicines and other health necessities, with devastating consequences. Few honest observers doubt that the war on Yemen, instigated by the Obama administration and their British junior partners in the Cameron cabinet, is a war of strategy in which the real target is regional dominance. As in Iraq in 2003, the British partnership is invaluable because of its long experience in the “management” of former colonies the likes of Iraq and Yemen, when the port of Aden was a central and crucial traffic point in the business of running the British empire.

Against this backdrop, this immense suffering, it is not that astonishing to see both the American and British governments acting above the law and going ahead with their arms businesses. But why? After all, these are the same governments that almost always exercise the vocal cords on behalf of human rights when and where alleged violations coincide with Western intentions of regime change and occupation. It is also puzzling indeed why the British and American officials are not instructing the media to manufacture consent for a campaign of human rights in Yemen as they did for Libya and Syria to cover their real intentions?

Possibly, because a lucrative alliance could suffer. The American and British weapons industry profit from the forgotten war on Yemen - as do all the other members of the NATO alliance and beyond.  The Obama administration sold on the world’s weapons market $200 billion worth of arms over eight years – over $100 billion to Saudi Arabia alone. In June, the US Senate approved Trump’s April arms sale of $110 billion to Riyadh. Britain’s war industries thrive on the suffering of Yemen too. Right now, UK made fighter jets are being flown by UK-trained military personnel and dropping UK-made bombs on Yemen. The UK is not just a bystander in this war, it is an active partner in crime.

War crimes are being committed in Yemen. If the United Kingdom is supporting that war, it is also culpable for those war crimes. Most British people don’t want their country to be engaged in war crimes. That’s another reason why the Downing Street really needs to pay attention to this.

Tags: Bahram Qassemi Iran UK Saudi
Short Link rasanews.ir/201oVe
Share
0
Please type in your comments in English.
The comments that contain insults or libel to individuals, ethnicities, or contradictions with the laws of the country and religious teachings will not be disclosed