Rasa - The United Nations says so far more than 400,000 desperate Rohingya Muslims have fled the violence in Myanmar and crossed into neighboring Bangladesh, as Dhaka pleads for global help to cope with the humanitarian crisis. 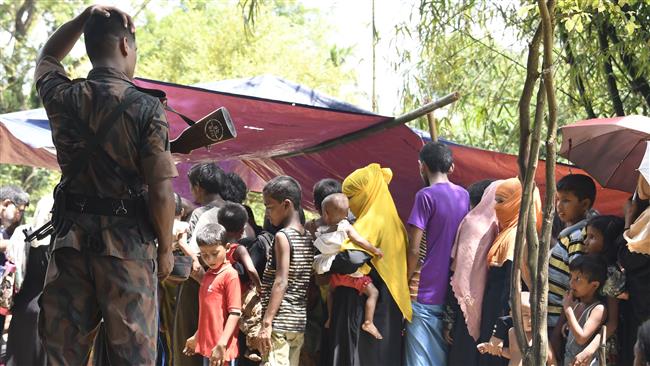 RNA - “An estimated 409,000 Rohingya refugees have arrived in Bangladesh since August 25, fleeing violence in Myanmar's Rakhine state,” said Joseph Tripua, a UN refugee agency spokesman, in a statement on Saturday.

The latest figure came a day after the UN announced that some 391,000 Rohingya refugees had entered Bangladesh, showing a leap of 18,000 in a matter of a day. The exodus from the violence-wracked Rakhine state makes it one of the fastest growing refugee crises in recent years.

On Saturday, Bangladeshi Prime Minister Sheikh Hasina headed for the UN General Assembly in New York to plead for international assistance in a bid to cope with the mounting crisis.

“Sheikh Hasina will raise the Rohingya issue during her speech at the UN General Assembly. She will seek immediate cessation of violence in Rakhine state in Myanmar and ask the UN secretary general to send a fact-finding missing to Rakhine,” said Nazrul Islam, a spokesman for the premier, on Saturday.

He added that Hasina would call on the international community to put pressure on Myanmar for the “repatriation of all the Rohingya refugees to their homeland in Myanmar.” The Bangladeshi prime minister left for New York a day after Dhaka summoned the Myanmar envoy for the third time to protest over its neighbor’s actions.

Conditions are deteriorating in Bangladesh’s border town of Cox's Bazar, where the constant influx has increased pressure on already-overcrowded Rohingya camps with 300,000 members of the minority from earlier refugee waves.

A joint report prepared by a group of UN agencies and two charities said at least a woman and two children had lost their lives “in a stampede during an unauthorized clothing distribution on the road in Balukhali Pan Bazar area” earlier on Friday.

The volatile Rakhine, located in the northwest of Myanmar, has been the scene of communal violence since 2012. Many of the Muslims have lost their lives while tens of thousands have been displaced as a result of attacks by Buddhists. The refugees largely live in camps in dire conditions.

Myanmar’s leader Aung San Suu Kyi is under fire by the international community and rights groups for allowing the government troops and the Buddhist mobs to further impose a violent clampdown on the desperate minority.

Suu Kyi, who was awarded the Nobel Peace Prize in 1991, is also heavily criticized by a number of her fellow Nobel laureates, including Malala Yousafzai and Desmond Tutu, for allowing such atrocities against the Rohingya.

Tags: Rohingya Myanmar
Short Link rasanews.ir/201oVB
Share
0
Please type in your comments in English.
The comments that contain insults or libel to individuals, ethnicities, or contradictions with the laws of the country and religious teachings will not be disclosed