Rasa - Iraqi government forces, backed by allied fighters from the Popular Mobilization Units, have launched a multi-pronged operation to dislodge Daesh Takfiri terrorists from an area on the border with Syria, south of the Euphrates River. 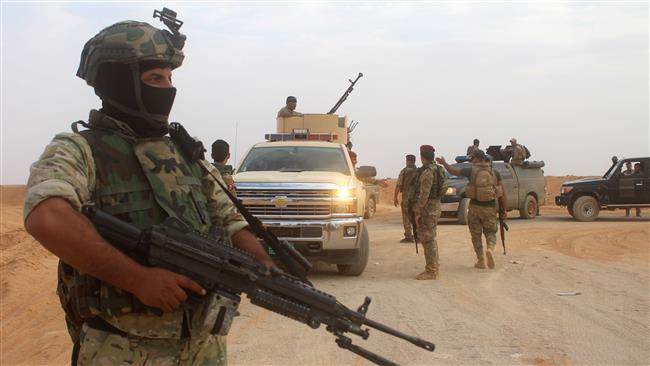 RNA - Lieutenant General Abdul-Amir Yarallah stated on Saturday that the offensive to liberate the town of Akashat, located 420 kilometers west of Baghdad, was aimed at securing border regions and the area north of the vital highway that linked the Iraqi capital to neighboring Jordan and Syria.

Meanwhile, the media bureau of the Popular Mobilization Units, commonly known by the Arabic name Hashd al-Sha’abi, announced in a statement that “all the goals set for the first phase of Akashat liberation operation have been achieved in record time.”

The statement added that pro-government volunteer fighters were engaged in an operation to secure the Iraqi-Syrian border and purge it of Daesh Takfiris.

On August 31, Prime Minister Haider al-Abadi said the city of Tal Afar and the entire Nineveh province had been purged of the Daesh Takfiri terrorist group.

Addressing reporters during a weekly press briefing in Baghdad on September 6, Abadi stated that government forces, in full cooperation with Kurdish Peshmerga fighters, would soon launch an operation to liberate Hawijah town in the oil-rich northern province of Kirkuk from Daesh Takfiri terrorists.

Daesh terrorists took control of Hawijah after capturing Mosul and several other Iraqi cities in mid-2014.

Hawijah is one of four Iraqi towns still controlled by Daesh. The other three towns of al-Qa'im, located nearly 400 kilometers northwest of Baghdad near the Syrian border, Anah and Rawa are in Anbar province.

Tags: DAESH Syria Iraq
Short Link rasanews.ir/201oVA
Share
0
Please type in your comments in English.
The comments that contain insults or libel to individuals, ethnicities, or contradictions with the laws of the country and religious teachings will not be disclosed