Iran to Firmly Respond to US

Rasa - A senior Iranian lawmaker announced that the Supervisory Committee of the Joint Comprehensive Plan of Action (JCPOA) will give a rigid response to the recent US action soon. 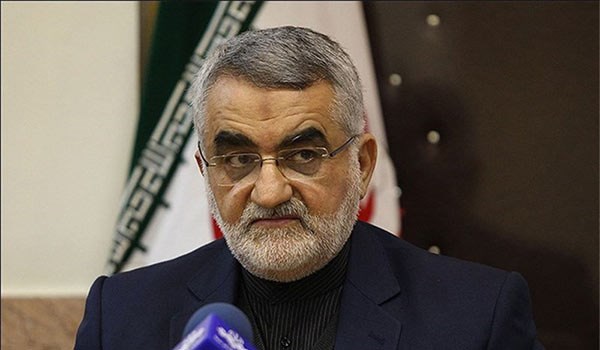 RNA - "The issue (US recent move) reveals a contradiction between text and spirit of the JCPOA, the Iranian Parliament and government will give a firm response to the breach of promise through the Supervisory Committee," Head of the Iranian Parliament's National Security and Foreign Policy Commission Alaeddin Boroujerdi said.

Boroujerdi's remarks came in reaction to US President Donald Trump's approval of a congress bill on applying new anti-Iran sanctions and prohibition sales of new aircraft to the country.

"In at least two parts of the JCPOA, once in the text and once in the attachment, it has been emphasized that passenger planes can be sold without any restrictions,” the senior lawmaker added.

The US has announced economic sanctions on 11 individuals and companies in Iran "accused of supporting Iran’s Islamic Revolution Guards Corps (IRGC)" or engaging in cyber attacks on US banks, but has decided to continue for now to exempt Iran from nuclear-related sanctions.

“Treasury will continue to take strong actions to counter Iran’s provocations, the ongoing campaign of violence in Syria, and cyber-attacks meant to destabilize the US financial system,” Treasury Department Secretary Steven Mnuchin said in a statement on Thursday.

The new sanctions targeted an engineering company, two air transport firms and an IT company accused of carrying out denial-of-service attacks on at least nine American financial institutions, including major banks and stock exchanges between 2011 and 2012.

The sanctions freeze any assets the individuals and companies hold in the US and prohibit American citizens and residents and US companies from doing business with them.

Foreign financial institutions that do business with them risk losing access to the US financial system, according to the Treasury statement.

Tags: US Iran
Short Link rasanews.ir/201oV0
Share
0
Please type in your comments in English.
The comments that contain insults or libel to individuals, ethnicities, or contradictions with the laws of the country and religious teachings will not be disclosed