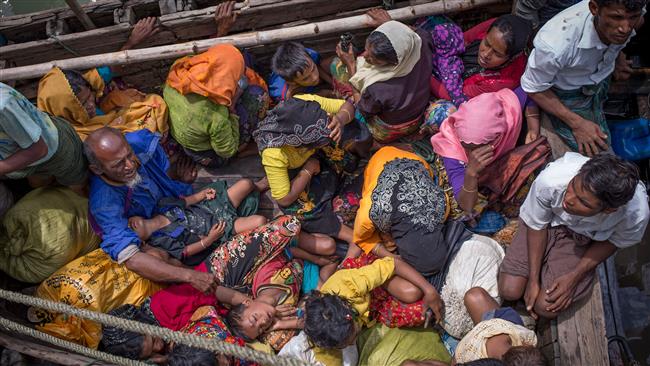 RNA - MEPs on Thursday called on Suu Kyi to "condemn unequivocally" all incitement to racial and religious hatred against Rohingya Muslims.

The resolution backed by MEPs "strongly urges the military and security forces to immediately cease the killings, harassment and rape of the Rohingya people, and the burning of their homes."

It also calls on the EU to make it clear it is prepared to consider sanctions against the Southeast Asian country if human rights abuses continue.

British MEP Amjad Bashir said, "Myanmar has taken extreme action against the whole Rohingya community in response to the terrorist actions of a few individuals. They have gone well beyond an acceptable response."

"We have put Myanmar on notice that unless the persecution and violence stops, we will take action," he added.

This comes as chilling accounts have emerged from Rohingya refugees telling of Myanmar soldiers firing on civilians and razing entire villages in Rakhine with the help of Buddhist mobs.

The latest resolution by the 28-nation bloc will put international pressure on Nobel peace laureate Suu Kyi to condemn the army campaign, which the UN says amounts to "ethnic cleansing."

Suu Kyi has already been pilloried by rights groups for failing to speak up for the Rohingya.

Critics have called for her to be stripped of her Nobel prize for failing to halt the strife.

Suu Kyi recently claimed that the widespread reports of killings and rapes against the Rohingya were fake news.

The violence, which has forced thousands of Rohingya Muslims to flee Myanmar to neighboring Bangladesh, has sparked a humanitarian crisis on both sides of the border.

Bangladesh is struggling to provide relief for the huge influx of exhausted and hungry refugees, some 60 percent of whom are children.

The United Nations also appealed on Thursday for massive help for nearly 400,000 Muslims from Myanmar who have fled to Bangladesh, with concern growing that the number could keep rising.

Mohammed Abdiker, director of operations and emergencies for the International Organization for Migration (IOM), called for a massive intensification of relief operations to help the refugees during a news conference in the Bangladeshi capital Dhaka.

"We urge the international community to step up humanitarian support and come up with help," Abdiker said, adding, “The need is "massive.”

Abdiker declined to say how many refugees he thought might end up in Bangladesh. "The number may rise to 600,000, 700,000, even one million if the situation in Myanmar does not improve," he noted.

Meanwhile, George William Okoth-Obbo, assistant high commissioner for operations at the UN refugee agency, told a news briefing that the most important thing was that the refugees be able to go home safely. "The international community has to support to ensure their return ... peacefully and with safety."

Numerous Rohingya villages in the north of Rakhine have been torched in recent days. A Reuters reporter in Bangladesh said smoke was rising from at least five places on the Myanmar side of the border on Thursday.

Myanmar’s forces have been attacking Rohingya Muslims and torching their villages in Rakhine since October 2016. The attacks have seen a sharp rise since August 25, following a number of armed attacks on police and military posts in the troubled western state. There have been numerous eyewitness accounts of summary executions, rapes, and arson attacks by the military since the crackdown against the minority group began.

On Tuesday, the 57-member Organization of Islamic Cooperation (OIC) called on Myanmar's government to allow UN investigators into Rakhine.

Tags: Muslim Rohingya Myanmar EU
Short Link rasanews.ir/201oUX
Share
0
Please type in your comments in English.
The comments that contain insults or libel to individuals, ethnicities, or contradictions with the laws of the country and religious teachings will not be disclosed