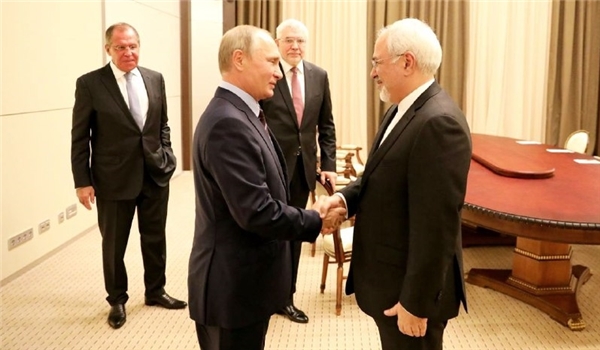 RNA - Zarif made the remarks in a meeting with Russian President Vladimir Putin on Wednesday.

Both countries stressed the JCPOA as a non-negotiable accord and also the need to follow up commitment by all parties, he added.

Zarif went on to say that Iran has so far been committed to nuclear deal, but unfortunately some parties have not remained committed.

Leaders of both countries aim to develop relations, he said.

"We also held talks on Syria, we had good cooperation in fighting terrorism and in safeguarding the country," he said.

"We will continue Syria talks with the attendance of Turkey in Astana, Kazakhstan within days," Zaif added.

In relevant remarks on Wednesday, Zarif praised Russia for taking side with Tehran in the implementation of the 2015 nuclear deal against Washington's antagonistic efforts against the internationally-endorsed agreement.

"Given the recent US policies, coordination between Iran and Russia is necessary and this coordination has existed so far and the two countries have supported each other in international organizations and in multilateral relations and Russia has very well supported Iran in the nuclear deal," Zarif told reporters upon arrival in Sochi on Wednesday for talks with the Russian officials.

Russian Foreign Ministry stated in February that the country is concerned over Iran's possible withdrawal from 2015 nuclear Deal.

Mikhail Ulyanov, the head of the ministry's Department for Nonproliferation and Arms Control, said "there are indeed concerns because we see rather harsh rhetoric from the US administration and Tehran's reciprocal tough rhetoric."

"You ask if there is a threat of Tehran's withdrawal? I believe that such an outcome would be a major failure for the entire international community," Ulyanov said.

Tags: Iran Putin Zarif Russia
Short Link rasanews.ir/201oUQ
Share
0
Please type in your comments in English.
The comments that contain insults or libel to individuals, ethnicities, or contradictions with the laws of the country and religious teachings will not be disclosed