Rasa - Bangladesh targets refugee profiteers as some boat operators are exploiting persecuted Rohingya Muslims fleeing violence in Myanmar by demanding up to $100 for ferry trips. 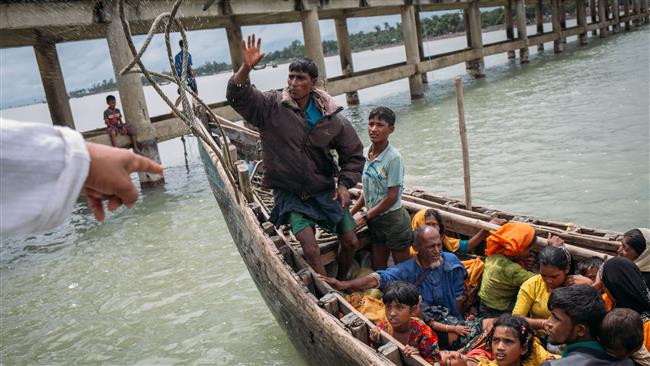 RNA - Local officials said Thursday that Bangladeshi mobile courts in the border town of Cox's Bazar and nearby districts have now started sentencing boat owners and local villagers to terms of up to six months in prison.

"So far we have convicted some 150 people," media outlets quoted Zahid Hossain Siddique, government administrator for the border town of Teknaf, as saying. He added, "Many of these people were sentenced to six months in jail after they were convicted on the spot"

Some members of the Rohingya community living in established refugee camps in Bangladesh have also been accused of joining the profiteering.

According to an AFP report, boat owners were charging refugees up to $100 for a 10-30 minute trip that would normally cost less than 50 cents.

Momena Begum, 35, a Rohingya mother of five, said, "The boatman extracted every last penny from us for the ferry. Now we want to go to the camp but don't have any money."

She sat with her children beside a highway running along the beach at Teknaf, unable to get a ride to the refugee camps some 10 kilometers from the border.

Another Rohingya woman Nadera Banu, 19, who got married only last year and is already a widow, noted, "The boatmen threatened to throw us into the sea if we refused to give them our valuables."

"I gave up the final memento of my husband, a gold locket given on my wedding day, to escape," she added.

Some media reports earlier indicated that Rohingya Muslims were being held by boatmen and agents for hours in coastal villages until they received inflated payments for the trip.

Many Rohingya Muslims have trekked across hills and through jungles for days to reach the border only to be faced with hugely inflated prices for a seat on a boat crossing the Naf River that divides the two countries.

The influx has left Bangladesh struggling to provide relief for exhausted and hungry refugees -- some 60 percent of whom are children.

This comes as a humanitarian crisis that sparked international condemnation showed no sign of abating Thursday.

Some 380,000 Rohingya Muslims have fled across the border since late August.

Many of those who have managed to take refuge in the country say Myanmar's soldiers and Buddhist mobs have been attacking civilians and burning down their homes.

Myanmar’s forces have intensified attacks against Rohingya Muslims in Rakhine since October 2016. The attacks have seen a sharp rise since August 25, following a number of armed attacks on police and military posts in the troubled western state. There have been numerous eyewitness accounts of summary executions, rapes, and arson attacks by the military since the crackdown against the minority group began.

There have been growing appeals for Myanmar's de facto ruler Aung San Suu Kyi to speak out in their defense.

Suu Kyi has so far ignored calls from the international community to stop the violence. The Nobel Peace Prize winner has done almost nothing to end the violence in Rakhine. She recently claimed that the widespread reports of killings and rapes against the Rohingya were fake news.

The UN chief called on Myanmar's authorities to halt the ongoing campaign against the Rohingya Muslims.

The UN Security Council on Wednesday also expressed concern in a statement about "excessive force" used by Myanmar's forces in Rakhine.

Tags: bangladesh Myanmar
Short Link rasanews.ir/201oUP
Share
0
Please type in your comments in English.
The comments that contain insults or libel to individuals, ethnicities, or contradictions with the laws of the country and religious teachings will not be disclosed