More than 50 people, 3 Iranians among them, killed in Iraq's twin attacks 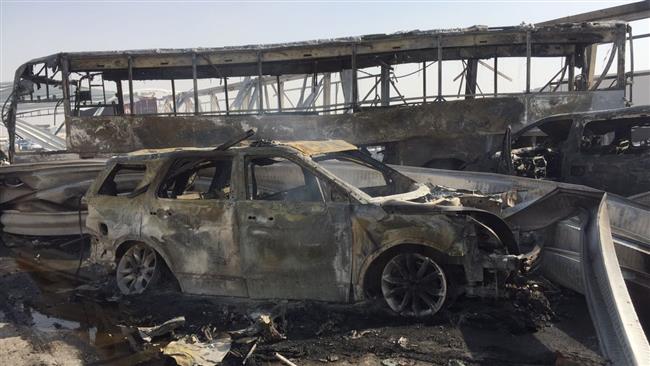 RNA - Abdel Hussein al-Jabri, deputy health chief for Dhi Qar province was quoted by AFP as saying that at 52 people lost their lives in the attacks, which left 91 others wounded.

One of the attacks occurred close to a restaurant near the city of Nasiriyah, the capital city of Dhi Qar province, situated about 370 kilometers (225 miles) southeast of the capital, Baghdad, on Thursday afternoon.

Hours after the attack, Daesh Takfiri terrorist group claimed responsibility for both attacks in the southern Iraqi city.

A statement on the terrorist group’s Amaq news agency said both attacks were carried out by Daesh terrorists.

According to the UN Assistance Mission for Iraq (UNAMI), a total of 125 Iraqi civilians lost their lives, and 188 others were injured as a result of terrorist attacks and other acts of violence across Iraq in August.

The UN mission, however, did not mention the number of Iraqi police forces, who were killed or sustained injuries during last month’s acts of violence.

A large number of the fatalities were recorded in the capital province of Baghdad, where 45 civilians were killed and 135 others wounded during the same period.

According to the UN figures, 36 people were killed and 18 injured in the northern province of Nineveh. Another four people lost their lives and 24 others suffered injuries in the central province of Salahuddin.

Iraqi army soldiers and pro-government fighters from the Popular Mobilization Units, commonly known by the Arabic name Hashd al-Sha’abi, are engaged in joint operations to win back militant-held areas of the country.

Iraq’s Prime Minister Haider al-Abadi said on August 31 that the northern city of Tal Afar and the entire Nineveh province had been purged of Daesh Takfiri terrorist group.

The recapture of Tal Afar was made possible with the help of the Iraqi army, Federal Police, counter-terrorism units, volunteer troops, and Rapid Response Forces, Abadi added.

In a related development on Thursday, the spokesman for Iran's Foreign Ministry strongly condemned twin terrorist attacks in Iraq’s Dhi Qar province, extending Tehran’s condolences to the Iraqi government and nation as well as the families of victims.

Bahram Qassemi also expressed his deep regret over death and injury of a number of Iranian pilgrims in the attacks, condoling with their families.

“The concerned institutions, including the Islamic Republic of Iran's embassy in Baghdad, are going through details of the incident to clarify the identities of dear and innocent martyrs and those wounded in this act of terrorism,” he said.

Tags: Iran Iraq
Short Link rasanews.ir/201oUJ
Share
0
Please type in your comments in English.
The comments that contain insults or libel to individuals, ethnicities, or contradictions with the laws of the country and religious teachings will not be disclosed