Rasa - Syrian President Bashar al-Assad says despite suffering from foreign-sponsored terrorism for the past seven years, his country is moving steadily towards victory, a day after the Russian military announced that government troops were in control of 85 percent of the whole Syrian territory. 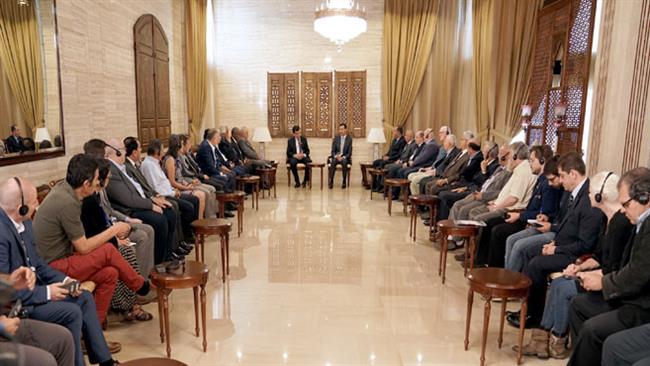 RNA - The Syrian leader made the remarks in a meeting with the participant in the third International Trade Union Conference (ITUC), which was held in the capital Damascus with the participation of organizations from some 60 countries.

The conference kicked off at Sahara Tourist Complex in the Damascus countryside on Monday with the aim of discussing ways of solidarity with the Syrian nation despite persisting militancy in the country and the economic blockade imposed by the West and its impact on the Syrian people.

President Assad further stressed the important role of popular organizations and social groups in raising awareness about the realities of the Syrian crisis among the international community and the dangers of terrorism, which is spreading across the globe.

He also denounced the “immoral economic embargo” imposed against his country by “certain superpowers” that seek to control other nations, saying the sanctions are in blatant violation of international and humanitarian laws.

Syria has been suffering from terrorism and a military, economic, and media war, but it is moving steadily towards victory “thanks to the sacrifices of our army, the steadfastness of our people, and the support of friendly countries,” Assad added.

The delegation members, for their part, voiced the support of their respective countries’ workers and people with the Arab country in its fight against terrorism. They also maintained that the Syrian crisis has had a great impact on the region and the entire world and its repercussions constitute a turning point in human history.

On Tuesday, Lieutenant General Aleksandr Lapin, the Russian chief of staff in Syria, announced that Damascus was in control of 85 percent of the Arab country’s territories. He added that Syrian forces must now purge terrorists from the country's remaining 15 percent, which amounts to 27,000 square kilometers.

Syria has been fighting different foreign-sponsored militant and terrorist groups since March 2011. The Damascus government has repeatedly blamed certain foreign countries for the spread of the devastating militancy.

Tags: Terror Assad Syria
Short Link rasanews.ir/201oU3
Share
0
Please type in your comments in English.
The comments that contain insults or libel to individuals, ethnicities, or contradictions with the laws of the country and religious teachings will not be disclosed