Rasa - The United Nations chief has called on Myanmar's authorities to halt the ongoing campaign against the persecuted Rohingya Muslims in Rakhine state. 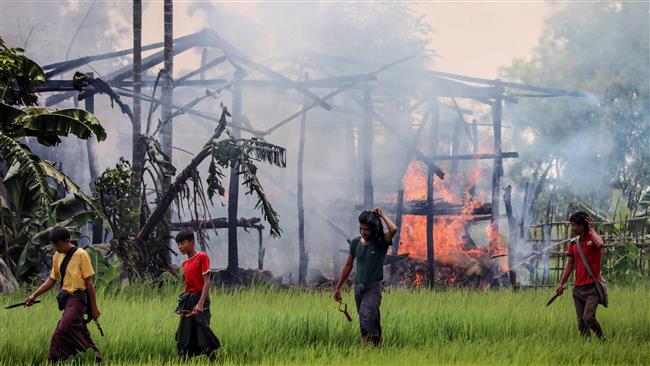 "I call on the Myanmar authorities to suspend military activities and violence and uphold the rule of law," he said in a press conference.

The UN Security Council on Wednesday expressed concern in a statement about "excessive force" used by Myanmar's forces in Rakhine.

The council said "immediate steps" need to be taken to end the violence.

The statement followed a council meeting held behind closed doors regarding the recent developments in Myanmar.

Myanmar’s forces have been attacking Rohingya Muslims and torching their villages in Rakhine since October 2016. The attacks have seen a sharp rise since August 25, following a number of armed attacks on police and military posts in the troubled western state. There have been numerous eyewitness accounts of summary executions, rapes, and arson attacks by the military since the crackdown against the minority group began.

The UN estimates that at least 370,000 Rohingya have fled to neighboring Bangladesh since late August. Many of those who have managed to take refuge in the country say Myanmar's soldiers and Buddhist mobs have been attacking civilians and burning down their homes.

On Tuesday, the 57-member Organization of Islamic Cooperation (OIC) called on Myanmar's government to allow UN investigators into Rakhine.

Myanmar’s leader Aung San Suu Kyi has so far ignored calls from the international community to stop the violence. The Nobel Peace Prize winner has done almost nothing to end the violence in Rakhine. She recently claimed that the widespread reports of killings and rape against the Rohingya were fake news.

An international campaign has been launched to call on the Nobel Peace Prize Committee to take back its 1991 prize to Suu Kyi.

Tags: Muslim Myanmar
Short Link rasanews.ir/201oU0
Share
0
Please type in your comments in English.
The comments that contain insults or libel to individuals, ethnicities, or contradictions with the laws of the country and religious teachings will not be disclosed