Rasa - Israeli forces have shot and injured a Palestinian boy for an alleged stabbing attempt east of the city of al-Khalil (Hebron) in the occupied West Bank. 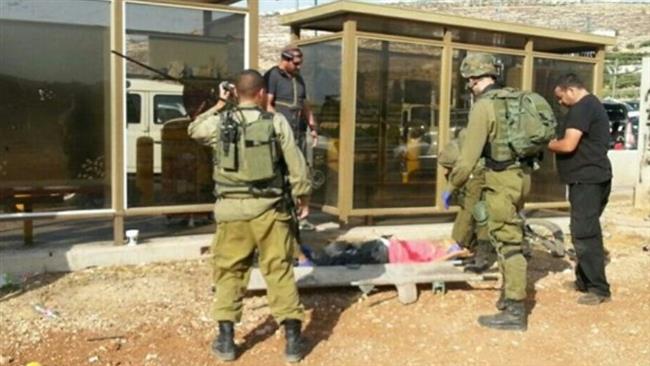 RNA - Israeli sources said the child was shot in his abdomen near the entrance to Kiryat Arba settlement on the outskirts of al-Khalil on Wednesday.

The sources claimed that an Israeli soldier opened fire on the boy while he was allegedly trying to carry out a stabbing attack.

Local Palestinian sources identified the injured as 13-year-old Haitham Hassan Isa Jaradat. They said Jaradat sustained a serious injury and had been transported to an Israeli hospital in the occupied Jerusalem al-Quds.

The occupied Palestinian territories have witnessed new tensions ever since Israeli forces introduced restrictions on the entry of Palestinian worshipers into the al-Aqsa Mosque compound in East Jerusalem al-Quds in August 2015. More than 300 Palestinians have lost their lives at the hands of Israeli forces in the tensions since the beginning of October 2015.

Tags: Palestinian Israel
Short Link rasanews.ir/201oTw
Share
0
Please type in your comments in English.
The comments that contain insults or libel to individuals, ethnicities, or contradictions with the laws of the country and religious teachings will not be disclosed