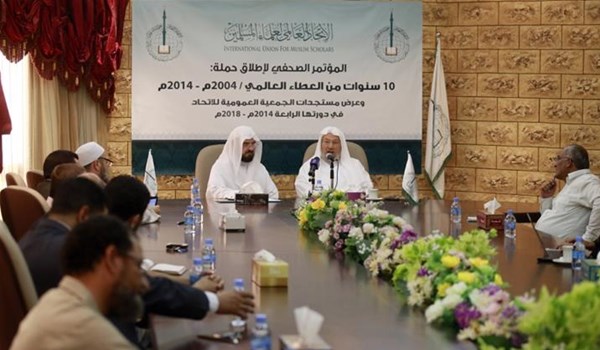 RNA - Salman al-Audah, a prominent Muslim preacher and member of the IUMS's board of trustees, and more than 20 others were arrested on Sunday, according to social media postings, Al Jazeera reported.

The IUMS said in a statement that the scholars "should not be used as pawns in political disputes", referring to the crisis between Qatar and four other Arab states, Saudi Arabia, the United Arab Emirates, Bahrain and Egypt.

The advocacy group said Audah 'has done nothing but call for unity between these brotherly countries, noting that his last tweet urged (P)GCC members to "come together for the sake of their people".

The IUMS is an organisation of Islamic theologians headed by chairman Yusuf al-Qaradawi and headquartered in Qatar.

About 90,000 Muslim scholars are connected through the union, which claims to bring together Sunni and Shiite Muslims.

Ali Qara Daghi, IUMS secretary-general, was quoted in the document as saying that Auda was known for his "moderate positions".

Saudi Arabia is yet to issue any official statement regarding the reported arrests.

Sunday's arrests came to light on Twitter after Khalid bin Fahd al-Audah said on Twitter on Sunday that the Saudi authorities had arrested his brother Salman.

He did not elaborate on the time of the arrest or the possible reasons behind it.

On Monday, activists reported on social media that the Saudi authorities had detained more than 20 Muslim preachers and scholars for unspecified reasons.

Activists on Tuesday said Saudi Arabia had detained more preachers and scholars as part of the security sweep.

The activists, who are dedicated to monitoring and documenting what they describe as "prisoners of conscience", reported on social media that at least eight prominent figures, including religious scholars, academics, television anchors and a poet, had been "confirmed" detained since Monday.

"Salman Al-Awdah, Awad al-Qarni, Farhan al-Malki and Mostafa Hassan are confirmed," said Yahya al-Assiri, ALQST head, referring to four of those reported to have been arrested.

"The rest are also correct, but I don't have any specific information."

Saudi officials could not be reached for comment on the recent arrests.

A Saudi security source told Reuters news agency the suspects were accused of "espionage activities and having contacts with external entities including the Muslim Brotherhood", which Saudi Arabia has classified as a "terrorist" organisation.

The ongoing crisis that the arrests are linked to broke out on June 5 when Saudi Arabia, the UAE, Bahrain and Egypt cut diplomatic and economic ties with Qatar, accusing it of supporting "extremists".

Qatar has strongly denied the accusation.

The quartet imposed air, land and sea blockade on Qatar before handing over a list of 13 demands to Doha.

The move was seen by Qatar as a direct attack on its sovereignty.

Tags: Qatar Saudi
Short Link rasanews.ir/201oTu
Share
0
Please type in your comments in English.
The comments that contain insults or libel to individuals, ethnicities, or contradictions with the laws of the country and religious teachings will not be disclosed